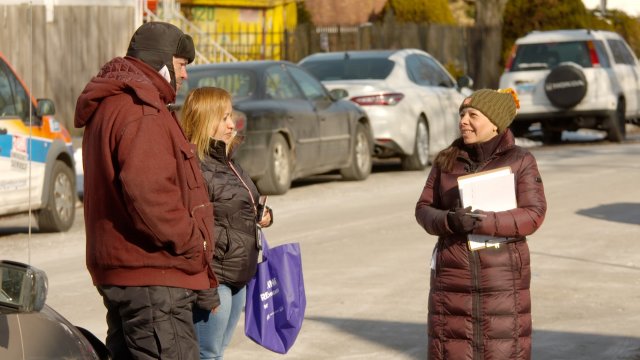 SMS
Census 2020: This Canvasser Is On A Mission To Get Latinos Counted
By Ben Schamisso
By Ben Schamisso
March 11, 2020
Mayra Sarabia has spent months trying to convince her worried Chicago Latino community that answering the census is safe and in their best interest.
SHOW TRANSCRIPT

"Good morning. We are passing by the block to remind the neighbors about the importance of filling out the census," said Mayra Sarabia, a Chicago immigrant rights advocate and canvasser.

It's a once-in-a-decade duty: Every household, even those with undocumented members, is required to fill out the 2020 census for every family member.

"If they ask you: Is my information safe? It is. It's not going to be shared with immigration enforcement. It's only to bring resources to the community. Thanks a lot. Good luck everyone," Sarabia told a group of volunteers before they split and started canvassing.

The outreach is about more than just an accurate people count.

The census is the foundation of all kinds of government decisions, from how to draw political district boundaries to how to fund schools, hospitals, parks and more. This year, advocates are particularly concerned about the country's growing Latino population — especially recent arrivals. They fear some may not answer the questionnaire because of misinformation or distrust of the government.

Sarabia: "We're here to talk about the census."

Local resident: "Oh no, don't bother me with this."

The Trump administration tried to add a question to the census about the respondents' citizenship, but the Supreme Court rejected the effort. The court argued that the White House's justification for the question wasn't genuine.

But even without the question on the form, canvassers say the administration's hardline policies have created deep anxiety within immigrant communities.

Another resident said: "A lot of neighbors say they are afraid that they are going to get reported, that the government is coming to count people who are undocumented."

Sarabia replied: "No, the census is safe. Your information is protected by law, it won't be shared with any agency."

In the last census, conducted in 2010, the government undercounted 1.5% of the Hispanic population and overcounted whites by 0.8%, according to the Census Bureau.

This time, Sarabia hopes that her efforts and those of her colleagues around the nation will close the gap.

Newsy's Ben Schamisso: "Do you feel pretty confident that this year, people in this community are going to be answering the census?"

Sarabia: "That's our hope. And we have gone to churches because people don't open the door, even if they're home. We have tried other ways to get to them. We go to the daycare that they go to. We go to the stores, we invite them to different events."

Outreach campaigns around the country rely on trusted community members like Sarabia to get the word out. She's been passionately canvassing for months and says what's at stake is as political as it is cultural.

Sarabia: "I've seen some of the schools: They have to eat in the classroom because they don't have a lunch room because the school is overcrowded. So I want to change that. I think it's an opportunity to show the world the real face of America."