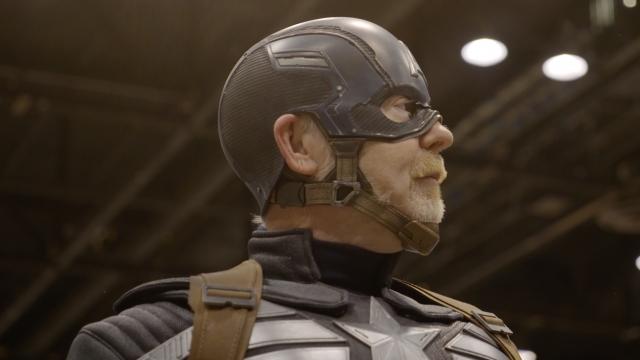 SMS
Celebs Incognito: We Followed Around 'Captain America' At C2E2
By Casey Mendoza
By Casey Mendoza
February 28, 2020
"There's this funny one-two where they're like, 'Hey Cap, that's a nice ... oh.' And then we get to take a photo. And I really love that."
SHOW TRANSCRIPT

"Hey, Adam! Nice job on the suit. Can I get a picture with you?"

"The best part. ... The second-best part of cosplay is taking off the helmet at the end. It's just, like, letting your head breathe. I look like I just got out of a shower."

"I'm wearing a stealth suit from 'Winter Soldier' made by the same group, Robert Fitch and Kevin Gossett. It feels great. This is actually one of the more comfortable cosplay costumes that I get to wear. ... This looks like it's ballistic nylon, but in fact it's dance fabric with a screen printed texture on it. So it's incredibly — it moves really well. Doesn't pinch at all. And most of all, it's not too hot."

"Walking in a full high-end costume is lovely, twofold. It's lovely. One is that when people see a good version of a costume, they just appreciate it. And it's lovely to share that. Another is that it's me and a lot of people are excited to meet me. And so there's this funny one-two where they're like, 'Hey Cap, that's a nice ... oh.' And then we get to take a photo. And I really love that."

"I love the cosplay. And part of what I love about it is that it's not easy. It's really fun. But it's also it's exposing part of yourself: You feel a little vulnerable, and then you're also always sweating. No matter what, you're always a little uncomfortable. There's parts of you exposed or way overly covered up. And going through that is just — it's part and parcel of the whole thing, and coming back and like shedding it off and putting on street clothes is the lovely return to reality."