'Celebrity Deathmatch' Gets Back In The Ring 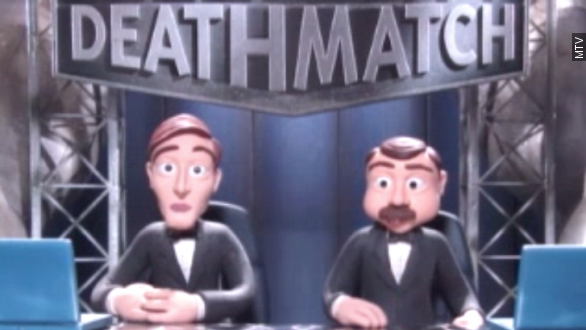 SMS
'Celebrity Deathmatch' Gets Back In The Ring
By Matt Moreno
By Matt Moreno
April 14, 2015
The Hollywood Reporter says MTV will bring back the iconic claymation show for the third time.
SHOW TRANSCRIPT

That's according to a report from The Hollywood Reporter, which MTV retweeted, so even without an official announcement yet, it's safe to bet it's a sure thing.

This will be the third time "Celebrity Deathmatch" hits the MTV airwaves.

The show, featuring Claymation renditions of real celebrities beating each other up, first appeared on MTV in 1998, running for 75 episodes before being canceled in 2002. It returned for a fifth season in '06 but was canceled again in 2007.

The Hollywood Reporter says show creator Eric Fogel will return for the renewal.

Fogel, according to IMDb, has most recently worked as a director for the Nickelodeon cartoon "Wallykazam," so this will certainly be a change of pace for him.

Now, we don't know which celebrities will duke it out on the show, but we've got some suggestions. So much has happened since 2007.

We're thinking paring the infamous Justin Bieber versus Orlando Bloom would be a great matchup.

According to a TMZ report, the two got into it in July last year, and witnesses said Bloom threw a punch at Bieber — something the Biebs still hasn't heard the end of.

"You're not a gangster. Accept that. I mean, come on. Orlando Bloom took a swing at you. That's not gangster, Justin," comedian Kevin Hart joked.

And let's toss in basically everyone involved with E!'s "Fashion Police," too.

Over the past few months, Kelly Osbourne left the show after Giuliana Rancic made a comment about Disney Channel star Zendaya Coleman. Not long after that, Kathy Griffin packed up and quit the show, too.

Lots of bad blood in Hollywood. It's time for "Celebrity Deathmatch" to settle things. The show will reportedly air on MTV2.