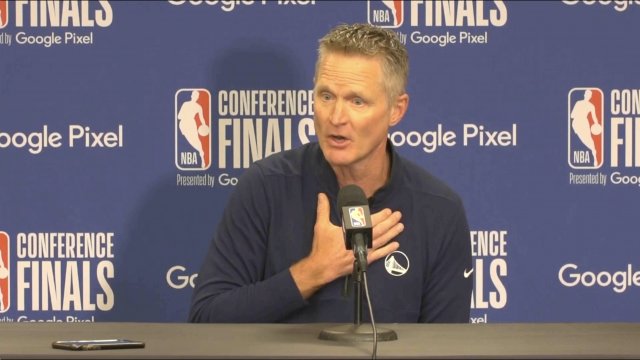 "When are we going to do something?" Kerr asked. "I'm tired. I'm so tired of getting up here and offering condolences to the devastated families that are out there. I'm so tired, excuse me, I'm sorry, I'm tired of the moments of silence. Enough."

The Golden State Warriors coach used his microphone to dismiss questions about basketball and plead with leaders in Washington to change our laws.

"Do you realize that 90% of Americans — regardless of political party — want background checks, universal background checks," he said. "Ninety percent of us. We are being held hostage by 50 senators in Washington who refuse to even put it to a vote, despite what we the American people want. They won't vote on it because they want to hold onto their own power. It's pathetic. I've had enough."

Actor Matthew McConaughey wrote a public letter to process this mass shooting in his hometown of Uvalde, asking Americans to consider "what small sacrifices can we individually take today, to preserve a healthier and safer nation, state, and neighborhood tomorrow?"

The actor — a sometimes rumored candidate for Texas governor — was criticized for stopping short of offering a concrete action to take.

At the Vatican, the Pope is calling for stricter gun restrictions, saying "it's time to say enough to the indiscriminate trafficking of weapons."

Kim Kardashian used a lengthy Twitter thread to call for an assault weapons ban and an increase on the legal age to buy a gun.

"We are parents. We are mothers. We are begging and pleading for action," she said.

Some well-known leaders of the gun control movement are survivors of school shootings themselves.

"We now have the most pro-gun reform president, at least on paper, and Congress in American history, and I do believe that this time can be different," gun violence prevention advocate David Hogg said.

All of them galvanized fans who hang on their words to push those in power to make changes.