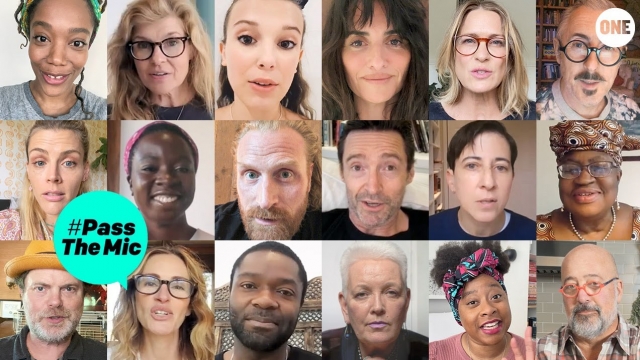 SMS
Celebrities Are 'Passing The Mic' To Public Health Experts
By Casey Mendoza
By Casey Mendoza
July 10, 2020
The project's first round of "social media takeovers" garnered more than 32 million views and over 1 million engagements.
SHOW TRANSCRIPT

Gayle Smith: "Our team and our creative allies got together and came up with the idea of seeing if we can do two things at once: utilize the power of the platform of celebrities, but also inject some facts and information and real life stories into the system."

Gayle Smith is the president and CEO of ONE Campaign, which organized the #PassTheMic social media takeovers. Forty-two celebrities — with a combined following of almost 260 million people — have participated. And the project's first round of videos garnered more than 32 million views and over 1 million engagements.

Experts featured in the campaign include emergency medicine doctors, epidemiologists and officials from organizations like the National Institute of Allergy and Infectious Diseases.

Smith: "Our first entry was Julia Roberts and Dr. Tony Fauci. And the funny thing there is that Julia Roberts is obviously a big star with a huge following, but Dr. Fauci is also, by now, pretty famous."

Smith says she hopes the campaign can combat online misinformation — which can oftentimes be spread by public figures and celebrities themselves, according to a recent study from the Reuters Institute for the Study of Journalism.

Peter Adams: "The polls tend to pit social media or quality news outlets, but that's a false distinction often. You can use social media to really put yourself in a way of a lot of good information. It just depends on how you use it."

Smith: "It's dangerous to spread falsehoods, but it's really powerful and easy to spread facts."