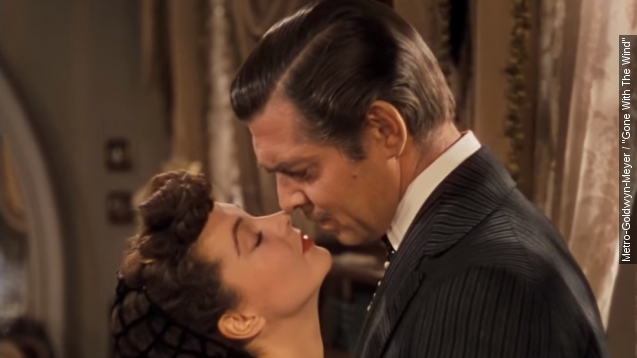 Metro-Goldwyn-Meyer / "Gone With The Wind"

And while the holiday is an excuse to show some love, it was actually created by a U.K. dental insurance company to raise awareness about the importance of oral hygiene. (Video via Echo Bridge Entertainment / "When Zachary Beaver Came to Town")

"Did you hear what I said, Ms. Kubelik? I absolutely adore you," said C.C. Baxter's character in United Artists' "The Apartment."

But showing affection hasn't always been common in American cinema.

"I am fond of you, you know. I often wish you weren't such a stinker," said Rosalind Russell's character in Columbia Pictures' "His Girl Friday."

Kissing kind of defines contemporary romances, but it wasn't so long ago that kissing was censored in American movies. (Videos via The Weinstein Company / "Silver Linings Playbook" and Columbia Pictures / "The Amazing Spider-Man 2")

Between the 1930s and 1960s, the Motion Picture Production Code, better known as the Hays Code, widely influenced the types of topics and behaviors shown in movies, including kissing. (Video via Warner Bros.)

According to the Hays Code, scenes of passion ought to exclude "prolonged kisses" and "handling of the body." The reason being that scenes of passion cause "dangerous emotions," particularly for young people and criminals.

This was especially true for films that included interracial couples. Similarly, the code censored same-sex couples under the "sex perversion" amendment. (Video via 20th Century Fox / "Island in the Sun")

In some ways, the Hays Code actually pulled back limits studios had already been pushing. One of the earliest known same-sex kisses on film came in 1927, before the code existed. (Video via Paramount Pictures / "Wings")

That was about 30 years after the first-ever known cinematic kiss in 1896, filmed by the famous inventor Thomas Edison. (Video via Kino Video / "The Kiss")

Of course, some studios pushed back against the code.

"That's what's wrong with you. You should be kissed, and often," said the character Rhett Butler in Metro-Goldwyn-Mayer's "Gone with the Wind."

This was especially true during and after World War II when American ideas about premarital sex and explicit depictions of adult themes were shifting. (Videos via Columbia Pictures / "From Here to Eternity" and Warner Bros. / "Casablanca")

The code's inability to keep up with culture shifts and the public's changing demands eventually made it obsolete, inspiring a ratings system announced in 1968, similar to the one we know today.

So, Happy International Kissing Day, everyone. If you can't find a partner, get creative.