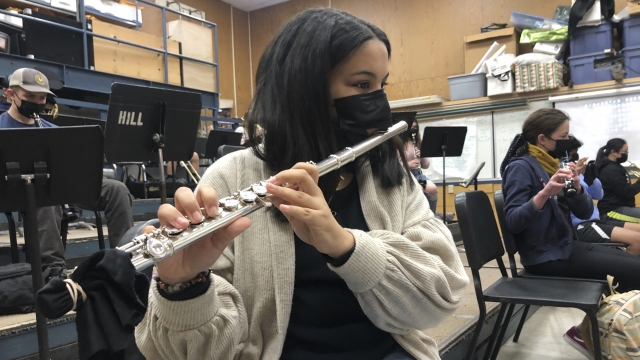 "The CDC is going to say that what you should do is everyone over...under the age of 12 should probably be wearing a mask in school. That's probably what's going to happen," President Biden said during a CNN town hall in Cincinnati on Wednesday.

President Biden saying to expect new guidance from the CDC about whether kids should wear masks in school.

The statement adding to existing confusion as parents and school districts demand more clear guidelines from the agency.

But Newsy found the CDC’s guidance is actually already clear, recommending children age 2 and older who are unvaccinated wear masks in schools.

But there’s a patchwork of rules in schools—varying from state to state...even district to district.

“We know that children under the age of 12 are unable to be vaccinated, so I would expect and encourage schools when they go back in person to have mask requirements for kids," said Elizabeth Hertel, director of the Michigan Department of Health and Human Services.

Michigan's top health official, now pushing a mask mandate in schools -- as other large districts, like Atlanta public schools, move toward masking everyone, saying they can’t police which students are vaccinated.

"We’ve been working with school districts throughout the summer to talk about what sort of measures they should put in place and based on the level of transmission that they have in their areas, they should be layering on different mitigation measures to keep those kids safe, including masks," Hertel said.

The push comes as the more contagious Delta variant explodes across the country. About 14% of confirmed COVID cases now are in kids. But the good news -- while it's more infectious, the Delta variant does NOT appear to be more dangerous to children than other variants.

Still, hospitals like Johns Hopkins All Children’s hospital in St. Petersburg, Florida are seeing an uptick in kids being admitted for COVID.

While CDC’s guidance is just a recommendation and not a mandate, districts across the country look to the agency for best practices. School and government officials complain the CDC's guidance has been confusing. First suggesting masks should be optional, despite low vaccination rates for K through 12 students. Then suggesting schools should still open even if social distancing of three feet isn't possible.

The CDC maintains that their guidance changes as the science around COVID-19 evolves.