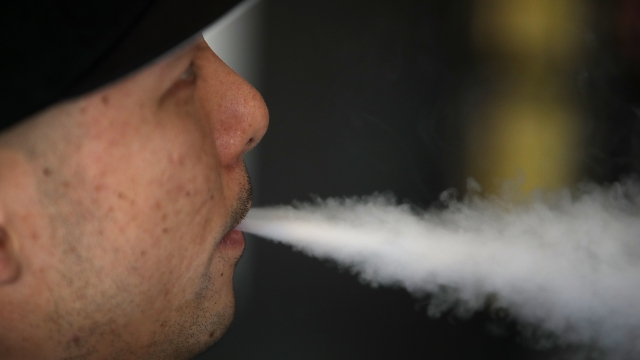 SMS
CDC Says Number Of Vaping-Related Lung Illness Has Doubled
By Ahmed Jawadi
By Ahmed Jawadi
September 6, 2019
The CDC said it's "aware of over 450 total possible cases" across 33 states of a mysterious illness seemingly related to vaping.
SHOW TRANSCRIPT

Health officials are warning people to stop using e-cigarettes as the number of cases of severe respiratory illnesses linked to vaping continues to rise.

On Friday, the CDC said it's "aware of over 450 total possible cases" across 33 states of a mysterious illness seemingly related to vaping. That's more than double the number of cases it reported two weeks ago, in which it said it received nearly 200 reports from 22 states of "potential cases of severe lung illness associated with e-cigarette product use."

The number of deaths due to vaping-related lung injury has also increased since the death of an Illinois resident back in August. Oregon announced a vaping-related death on Tuesday, while Indiana, Minnesota and Los Angeles each reported deaths on Friday, bringing the total national count to five so far.

In its initial findings of its ongoing investigation, the CDC said the illnesses "are likely associated with a chemical exposure," but said it's still "too early to pinpoint a single product or substance common to all cases." However, it did say that "many of the patients ... reported recent use of THC-containing products, [while] some reported using both THC- and nicotine-containing products. A smaller group reported using nicotine only."

The CDC is now cautioning e-cigarette users to "not buy [e-cigarette] products off the street," as well as "not modify e-cigarette products or add any substances that are not intended by the manufacturer."