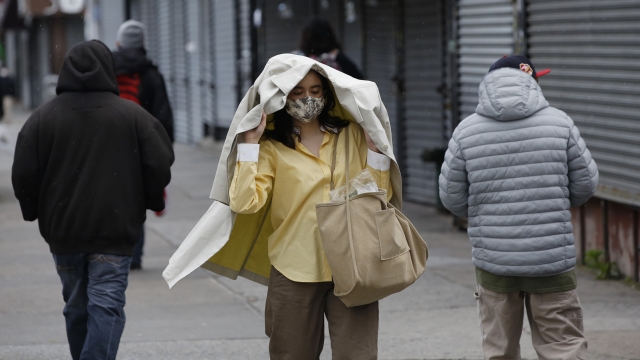 Freezer trucks are lining up in the "disaster morgue" on Brooklyn's 39th Street Pier. That's because funeral directors are overwhelmed in the New York City borough with the highest coronavirus death toll among counties in the U.S.

And a new CDC report out Monday says the city may have had thousands more coronavirus deaths than official numbers show.

The CDC found New York City had an unexplained surge of 5,300 fatalities between March 11 and May 2. They are not included in the city's more than 24,000 recorded COVID-19 deaths.

The CDC analyzed New York death rates over the last five years. It says the spike may have been people dying of the coronavirus outside of health care settings and without having been tested.

The report said: "Counting only confirmed or probable COVID-19–associated deaths ... likely underestimates the number of deaths attributable to the pandemic."

At St. Barholomew Catholic Church, a large immigrant congregation in Brooklyn, the pastor says the virus has brought "a real tsunami" of sickness and death.

"We have a death list of around 60, 65 people who have died that we know of at this point. But my guess, it's probably double or triple that amount.”

As of Tuesday, the state of New York had reported 27,000 COVID-19 deaths and more than 340,000 cases. The rate of deaths and new infections is falling. Gov. Andrew Cuomo says the state will begin gradually easing lockdown measures on Friday.

"When you see the number of lives lost, again, we're right about where we started before we really went into the heart of this crisis, and that's what it's been. It's been a crisis, and a painful one, but we're coming out of the other side."

This CDC graphic shows the March and early April surge in coronavirus deaths in New York City as well as the total death spike above average years.

The CDC is also studying whether people may have died at increased rates because many with severe conditions did not or could not receive care at overwhelmed hospitals.