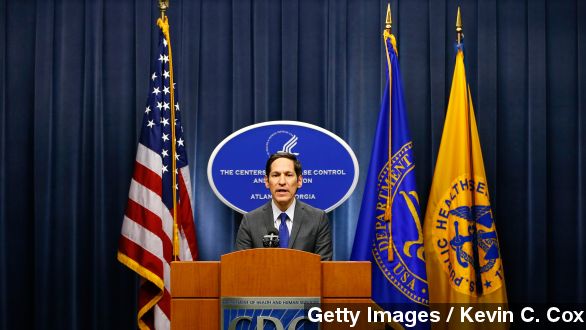 The CDC has been criticized over its response to the first cases of Ebola in the U.S., but Tuesday CDC Director Tom Frieden said the agency will now take charge of stopping the spread directly.

"For any hospital anywhere in the country that has a confirmed case of Ebola, we will put a team on the ground within hours."

The team will travel to hospitals, like Texas Health Presbyterian in Dallas where the first U.S. Ebola patient, Thomas Duncan, was treated, to make sure hospital workers are trained and equipped to treat patients while keeping themselves safe.

Frieden didn't say when the CDC came up with this idea, but it's most likely a response to the Dallas nurse who contracted the virus while treating Duncan.

Nina Pham's condition is reportedly improving, which is good news, but the fact that she got infected at all is very concerning. After all, we've spent the last few months hearing things like this:

"Any hospital with an intensive care unit has the capacity to isolate patients. There's nothing particularly special about the isolation of the Ebola patient, other than it's really important to do it right."

Officials still don't know how Pham got infected, but Frieden made some people angry when he said a "breach of protocol" must be to blame. That was interpreted as him saying the nurse must have made a mistake.

But by his own admission, it's easy to make a mistake like that. For all Frieden's talk about how enacting the proper protocols are well within the reach of most hospitals, he's also been saying things like this:

"We know that even a single lapse or breach, inadvertent, can result in infection."

So, given the risks involved and how easy it is to, say, use protective equipment incorrectly or fail to follow protocol to the letter, shouldn't the CDC have set up this rapid response system much earlier? Guess who seems to think so.

"I wish that we had put a team like this on the ground the day the patient, the first patient, was diagnosed. That might have prevented this infection."