CDC Director On Ebola Outbreak: 'It's Worse Than I Feared' 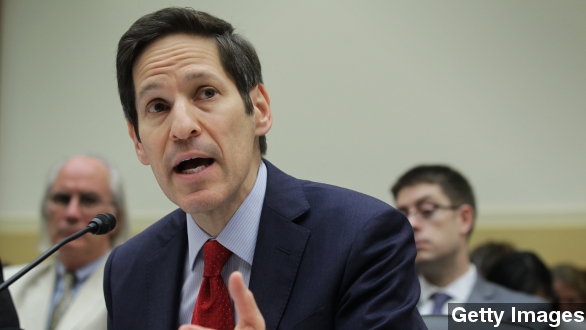 TOM FRIEDEN TO CNN: "No one has ever seen an outbreak of Ebola like this, with this kind of explosive spread in urban areas. Every day this outbreak goes on, it increases the risk for another export to another country."

​Frieden told CNN of the outbreak: "It's even worse than I'd feared." He spoke to the outlet in Liberia's capital — just one of the areas affected by the largest Ebola outbreak on record.

According to the World Health Organization, more than 2,600 people have been infected with the deadly virus across Liberia, Nigeria, Guinea and Sierra Leone since the outbreak began in December. Of those infected, nearly 1,500 have lost their lives.

And even more ominous — it seems those who are trying hardest to help stop the spread of Ebola are starting to succumb to the disease as well.

WHO reported in its latest update Thursday more than 120 health care workers are among the dead and more than twice that number have been infected.

Health experts say there are many reasons for these numbers, including a shortage of protective equipment — like gloves and face masks — and improper use of the equipment they do have. (Video via Euronews)

And USA Today notes the "compassionate instincts" of those who rush to aid the visibly ill without taking proper safety precautions first also put health care workers at an increased risk of infection.

Before his interview with CNN, Frieden admitted the Ebola virus has the "upper hand," but he seemed optimistic that the outbreak can eventually be contained.

He said in a meeting Monday, "Ebola doesn't spread by mysterious means, we know how it spreads. So we have the means to stop it from spreading, but it requires tremendous attention to every detail."

Frieden's comments came just a day before the Ministry of Health for the Democratic Republic of Congo notified WHO of another possible Ebola outbreak. Health officials are currently investigating that claim.