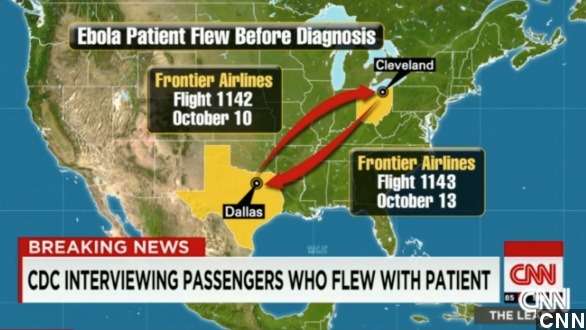 By Christian Bryant
October 15, 2014
Although Amber Vinson had a low fever and cared for Thomas Duncan, CDC officials said Wednesday she was allowed to fly because she wasn't high risk.
SHOW TRANSCRIPT

CNN: "Vinson took two Frontier Airlines flights. First, from Dallas to Cleveland, then back to Dallas. She didn't show symptoms at the time."

But Vinson did have a low fever — 99.5 degrees Fahrenheit. She called the Centers for Disease Control and Prevention Monday before boarding her flight, but she wasn't restricted from flying.

NBC REPORTER KATE SNOW: "The CDC did not tell the hospital to tell their staff not to travel?"

DALLAS COUNTY JUDGE CLAY JENKINS: "The staff that was under self-monitor."

CDC Director Tom Frieden said Wednesday Vinson should not have flown. But considering her fever and the fact that she treated an Ebola patient, how exactly did she make it on a plane?

DR. JON LAPOOK VIA CBS: "The person at the CDC looked at a chart and because her fever wasn't 100.4 or higher, she didn't officially fall into the group of 'high risk.'"

It's uncertain what sort of protocol was in place before Vinson or Nina Pham tested positive for Ebola, but Frieden added Wednesday, "We will from this moment forward ensure that no other individual who is being monitored for exposure undergoes travel in any way other than controlled movement."

While Vinson is receiving treatment, health officials are urging the other 132 passengers aboard Frontier Airlines flight 1143 to call the CDC.

Also Wednesday, an official at Texas Health Presbyterian Dallas Hospital admitted the hospital made mistakes in its care for Thomas Eric Duncan. Chief clinical officer Dr. Daniel Varga said in part, "We did not correctly diagnose his symptoms as those of Ebola. We are deeply sorry."

Frieden said the CDC has not identified anyone else that should be tested for Ebola, but will continue to closely monitor other health workers.