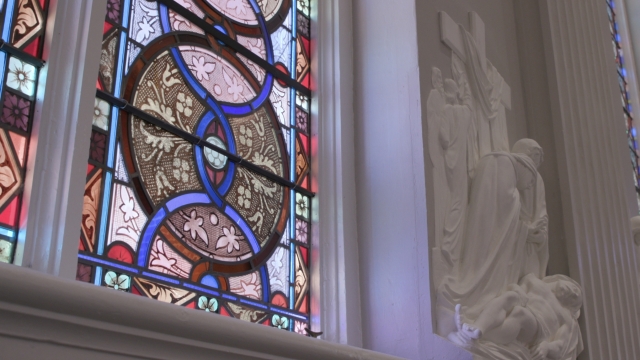 The CDC's warning for singing in houses of worship disappeared overnight. But Dr. Anthony Fauci tells Newsy the COVID-19 risk is still there.

Since the coronavirus pandemic began, the music at Holy Trinity Catholic Church in Washington has played virtually with singers at home spliced into services streamed live on Zoom.

“It's frustrating because particularly when we have a crisis like this, people go to church. And Zoom doesn't do it,” said the priest, Father Kevin Gillespie, S.J. “It makes it a deeper experience when you have a choir. It makes it even more powerful.”

A task force he assembled is working on a plan to safely reopen the church for mass when the city allows it, weighing the difficult question of how to bring back the church choir while minimizing the risk of spreading the virus.

Scientists have found singing can eject viral droplets farther than just speaking, and Gillespie said masks for a singing choir are probably impractical.

His task force is relying on guidance from local and federal health officials, including the CDC.

The agency published Interim Guidance for Communities of Faith, recommendations for minimizing spread of the virus in places of worship.

When the CDC first released the guidance, it said, "Consider suspending or at least decreasing use of a choir/musical ensembles and congregant singing, chanting, or reciting during services or other programming, if appropriate within the faith tradition.” And, “The act of singing may contribute to transmission of COVID-19, possibly through emission of aerosols.”

Using the Wayback Machine internet archive site, Newsy was able to track changes made to the CDC guidance.

We found the CDC removed the singing warnings with no explanation on May 23, the night after originally posting them.

Also gone were recommendations to have more virtual activities and drive-in options at places of worship to avoid spreading the virus.

Yet Dr. Anthony Fauci, the U.S. government’s top infectious disease expert, told Newsy that churches should consider suspending the use of a choir if they’re in a place with high rates of infection.

“It’s not one-size-fits-all,” Fauci said. “When you’re dealing with a place that has a considerable number of cases, my recommendation still holds that choirs should refrain from singing. When you sing and project your voice, aerosols of the virus come out.”

Fauci said he understood how his message could be confusing now that the CDC has removed its own warnings about church choirs.

“That’s for other people to figure out,” Fauci said of the two views coming from the federal government.

The CDC did not respond to our questions about why it deleted the live music warnings.

Fauci said he doesn’t know why the singing recommendations disappeared.

“I don’t know what went on, so I prefer to refrain from commenting on that,” Fauci said.

The Washington Post, citing two unnamed White House officials, reported that the CDC’s initial guidance for faith communities had not yet been approved by the administration when first published.

President Trump has repeatedly called for places of worship to reopen, calling them essential.

We asked him: Could there be a scientific reason to remove recommendations to consider limiting choir use in a pandemic?

“I can’t imagine a scientific reason for that because the fact is that choirs, singing particularly indoors, particularly without a mask, does greatly increase the risk that COVID would spread,” said Frieden, now president and CEO of the public health initiative Resolve to Save Lives.

The agency also still has posted to its site a study about dozens infected with the virus in March after a single choir practice in Washington State. Two died.

Gillespie at Holy Trinity Catholic Church is confident he can balance the health of his members with the benefit of music.

“The joy that will be in this place and in the hearts of the people,” he said. “I'm filled up because I know I have the privilege to be there and to hear them.”