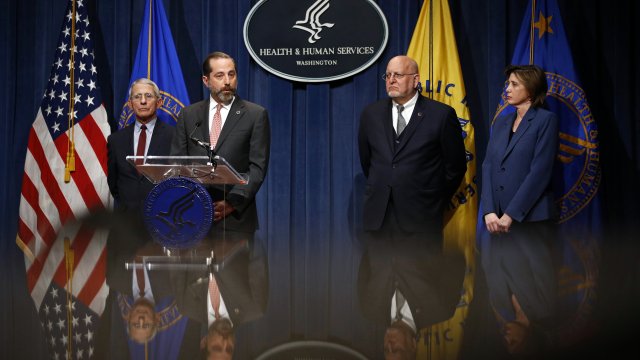 SMS
CDC Confirms Possible Community Spread Of Coronavirus In U.S.
By Lauren Magarino
By Lauren Magarino
February 27, 2020
The CDC confirmed a 15th case of infection in the U.S., but this time it doesn't know how the patient became infected.
SHOW TRANSCRIPT

The spread of the novel coronavirus has evolved in the U.S.

The Centers for Disease Control and Prevention confirmed a 15th case of infection, but this time around it doesn't know where the infection came from. This case is potentially the first instance of infection by community spread, which is when the source of an infection is unknown.

All cases of infection in the U.S. so far have been associated with travel to Wuhan, China.

But this patient, based in California, doesn't have relevant travel history or connection to another confirmed patient, according to a press release. The CDC hasn't ruled out the patient's potential exposure to an infected returned traveler.

"We're ready to adapt and we're ready to do what we have to as the disease spreads, if it spreads," President Trump said.

Last month, the Trump administration declared the outbreak a public health emergency. The White House wants $2.5 billion to fight the coronavirus, but Democrats have said the administration's plan is not good enough.

"If they want to give us the money, we'll take the money," President Trump said. "We'll just do a good job with it."