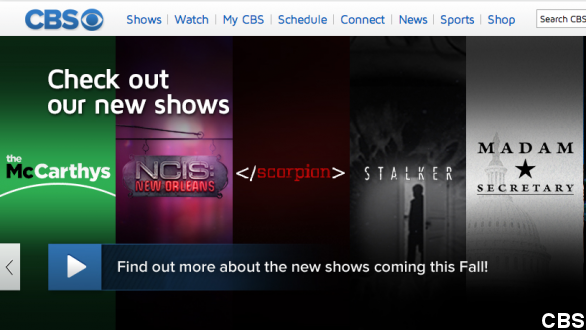 By Brice Sander
May 15, 2014
CBS will roll out franchise spinoffs and football this fall to compete with NBC, ABC and Fox's "eventized" schedules.
SHOW TRANSCRIPT

CBS was the last of the big four broadcast networks to announce its fall schedule — and like NBC, Fox and ABC, CBS had a theme.

Franchises. The network will roll out spinoffs of two of its highest-rated dramas: "NCIS: New Orleans" and "CSI: Cyber," starring Patricia Arquette. Both shows' first episodes aired as backdoor pilots earlier this season on their respective sister series.

One franchise CBS shockingly decided not to continue was "How I Met Your Mother." The creators of the hit comedy developed a sequel/spinoff, "How I Met Your Dad," which most media expected to go to series. But CBS said there were some "problems" with its pilot. (Via Rolling Stone, Los Angeles Times, USA Today, Washington Post)

Meg Ryan is still attached to "How I Met Your Dad" as the narrator — and Deadline reports rival networks are interested in picking up the 20th Century Fox-produced show.

The eye net will only air one new comedy in the fall – "The McCarthys," a family sitcom developed last year and retooled for this season.

An "Odd Couple" update starring Matthew Perry will premiere at midseason after some tweaking, per TVLine.

That show will most likely replace "Two and a Half Men," which will finally come to an end after 12 seasons. CBS is expected to give the comedy a season-long send-off, similar to the one it gave "How I Met Your Mother." (Via Us Weekly)

That includes flipping the broadcast schedule on its head with year-round scripted series. CBS will launch the Halle Berry alien thriller "Extant" this summer.

On top of that, CBS ordered a few series seemingly outside its procedural comfort zone designed to get viewers live tweeting, including crime thriller "Stalker," drama "Scorpion" about a network of geniuses and detective show "Battle Creek" from "Breaking Bad" creator Vince Gilligan. (Via Mashable)

Forbes predicts many — if not all — of the new shows will run for fewer episodes because CBS has a lot of shows to get on the air in the 2014-2015 season. It previously renewed 18 series.

But Time says, don't let the new model fool you. This is the same old CBS.

"It's worth noting that CBS's changes are almost entirely about strategy and scheduling. ... Creatively, the changes involve bringing in new series that look absolutely, 100%, like CBS shows. ... If CBS is a restaurant, in other words, they're rearranging the dining room, not changing the menu."

Yes, even though "Stalker" looks different, it could easily have been folded into the "Criminal Minds" franchise.

And new Tea Leoni drama "Madam Secretary" looks pretty similar to "The Good Wife," which it's paired with on Sundays.

Still, Variety says, there is one big change coming to CBS.

"The network also enjoys what is quite possibly the coup of the fall by having snagged a September-October package of Thursday-night NFL games, which should be the sort of ratings grabber – and breather for the network's lagging comedies – that covers up a multitude of sins."

So CBS is seemingly banking on football and franchises to bounce back after falling behind NBC in the 18-49 demographic this season. The network remains No. 1 in total viewers.