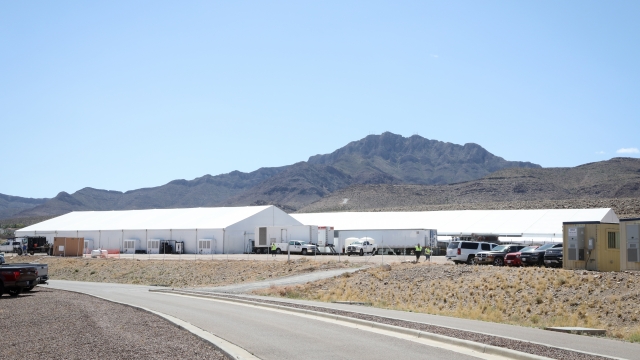 SMS
CBP Opens 2 New Tent Facilities In Texas To House Migrants
By Ahmed Jawadi
By Ahmed Jawadi
May 3, 2019
CBP said it's opening up the facilities to address the "record number" of people encountered at the U.S.' southern border.
SHOW TRANSCRIPT

The U.S. Customs and Border Protection agency has opened two temporary facilities in Texas to help house migrants arriving at the U.S.-Mexico border.

CBP announced Thursday that it's opening up the tent structures in El Paso and Donna, Texas "to address [the] record number of families [and] children encountered crossing the southwest border." The agency says the facilities are "weatherproof, climate-controlled," and can "accommodate up to 500 individuals" each. They also offer bathrooms, recreation areas and sleeping quarters. The tents are set to operate through the end of the year, at a cost of nearly $37 million.

According to CBP data, "[over 90,000] people were apprehended between ports of entry on the Southwest Border" in March. That's more than double the number of apprehensions reported in the same month in 2018. CBP officials also said they've seen more than a 370 percent increase in the amount of family apprehensions compared to last year.

The agency said migrants will stay in these facilities for less than 72 hours before being released to either Immigration and Customs Enforcement or, if they are unaccompanied minors, to Health and Human Services. The facilities are set to begin operations on Friday.