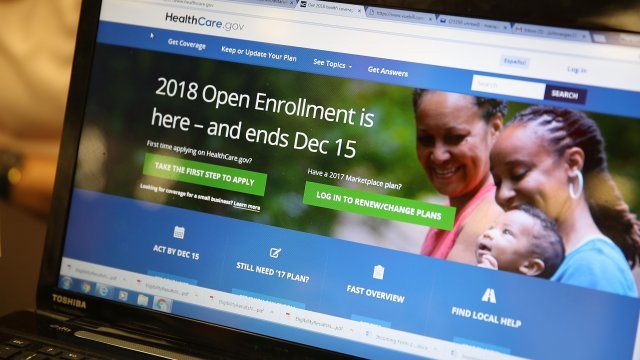 Two government agencies just put out a new report on the status of Obamacare, and according to them, it's doing OK.

Remember, in 2017 Republicans tried, but failed, to repeal Obamacare. However, they did eliminate the individual mandate as part of their tax cut bill. All of that made the future of the health care law a little murky.

In a report published Wednesday, the Congressional Budget Office and the Joint Committee on Taxation said "the nongroup health insurance market is stable in most areas of the country over the next decade."

On average, 244 million Americans under age 65 will have health insurance in any given month this year, and about 9 million of those people will get their insurance through the marketplaces. But about 29 million people are uninsured each month.

An additional 3 million people are expected to be uninsured in 2019, mostly due to the elimination of the individual mandate and higher premiums.

Premiums for Obamacare's benchmark plans are expected to go up about 15 percent next year. But after that, the CBO and JCT think premiums will go up an average of about 7 percent a year for the next decade.

The report notes that lower income Americans won't notice the increased premiums as much, thanks to government subsidies. And that helps keep the health insurance market stable.