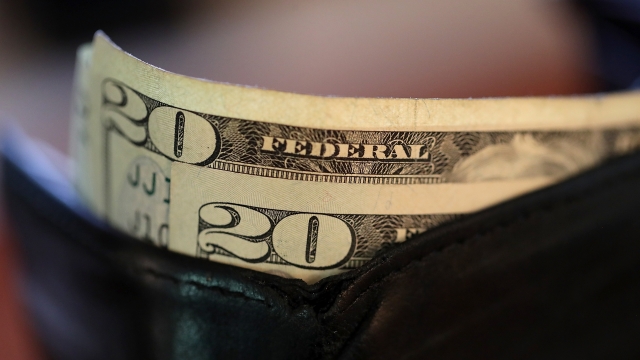 The Congressional Budget Office released a report on Monday that projects boosting the federal minimum wage to $15 an hour could also mean 1.3 million job cuts. The report also predicts the effects of a $10 or $12 minimum wage by 2025.

The federal minimum wage has been $7.25 an hour since 2009, but only 21 states have stuck with that amount. Other states have set their minimum wages as high as $12, and some will rise to $15 in the next few years. But House Democrats are pushing for $15 in every state with a bill called the Raise the Wage Act. It was introduced in January.

But the report estimates that alongside those pay increases, 1.3 million people who would otherwise be working would be jobless in an average week in 2025. The report says that's a 0.8% reduction in the number of employed workers.

If the $12 option went into effect, it would mean pay raises for 5 million workers earning less than that, and another 6 million already earning more than that could see a boost. In this case, the report predicts roughly 330,000 people would lose their jobs. About 400,000 people's incomes would rise above the poverty level.

Boosting the minimum wage to $10 an hour would mean at least 1.5 million people would see pay raises and 2 million people already earning more than that could see increases. The report says this option could see up to 100,000 jobs lost and have "negligible effects" on the poverty level.

If the $15 option in the Raise the Wage Act were passed, the CBO says it would also affect family income in other ways, including higher prices on consumer goods due to higher labor costs; a reduction to the nation's output; and a decline in the U.S.' stock of capital like buildings, machines and tech. The report says total real family income would fall by $9 billion, or 0.1%, in 2025.

Democratic Rep. Bobby Scott is the chairman of the House Education and Labor Committee, and he's sponsoring the Raise the Wage Act. He said the CBO's report shows that the benefits of increasing the federal minimum wage to $15 an hour "far outweighs any potential costs."

The House is expected to vote on the bill next week.