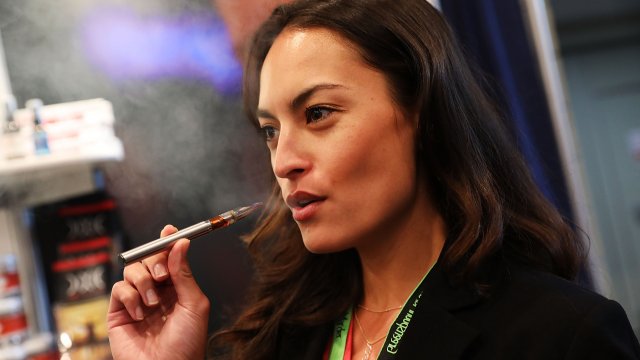 Forensic toxicologist Michelle Peace had been testing e-cigarettes and vaping products in her lab at Virginia Commonwealth University for four years, when she got a phone call about a CBD in 2018.

Peace ordered more products directly from Diamond CBD, a well known online retailer. What she found shocked her -- synthetic cannabinoids like those found in "K2" and "Spice" and the active ingredient in cough syrup, which some people use to make "lean."

In response to Peace's report, Diamond CBD said it would retest its products, but reports of poisonings related to CBD haven't gone away.

Since then, Peace says she's received dozens of calls, emails and social media messages from people across the country who say they think they've been poisoned by a CBD product.

"Their vision has changed or they're hallucinating or they've got some enhancement of, I guess you call it an enhancement of their auditory experience, where they think they're hearing things but they don't think that it's real," she said.

And she's not the only one getting calls. So far this year, poison control centers across the country have managed more than 900 cases related to CBD products. That's double the number of cases in 2018.

Peace and her team of researchers have been testing CBD products sent to her by callers, and she says preliminary results show that almost all of them contain synthetics.

And just like that first Diamond CBD vape pen, she says most of the products she's been testing look completely legit.

"The packaging is nice. The labeling is designed and printed right. It's a good it's a nice looking bottle," she said.

While hemp CBD products are now legal under the 2018 Farm Bill, the U.S. Food and Drug Administration  hasn't issued any regulations on them.

Experts say that's created a risky market for consumers. People who want to buy CBD have to trust that the manufacturers and sellers are doing their part to make sure their products are safe and that they haven't been adulterated.

Marielle Weintraub, president of the U.S. Hemp authority, the main body that currently certifies hemp CBD products for safety, says the organization is aware that CBD poisonings have occurred, and they are working to improve their own guidelines.

"By certifying hemp derived CBD, we thought that would be an understood, naturally occurring a CBD. But in 2.0, which is the newest updated regulations that we're putting out, we have specifically written in, no that synthetic CBD is not allowed in the products that are being certified by the US hemp authority,'" Weintraub said.

Earlier this year, the FDA held a 10-hour public hearing with hundreds of stakeholders in the CBD industry, including Peace, but regulators said it could be years before they have any draft rules for CBD.

It's also unclear if CBD vape products would be included in those regulations.

Now Congress is putting pressure on the FDA to draft guidelines faster and some members have reportedly been considering legislating regulations in the meantime.

In June, Oregon Sen. Ron Wyden sent a letter to the FDA urging regulators to issue interim rules by August 1.

"It would scare me to have Congress start writing regulations for the FDA, but I do think they need to continue to push the FDA because it was Congress pushing the FDA that even, was the reason the FDA had that open forum for us in May this year. Do I believe there are help in pushing the FDA further faster is immensely important," Weintraub said.

On July 13, FDA Acting Chief Information Officer Amy Abernethy tweeted that the FDA is "expediting" it's work to address questions about CBD regulations.

But until the FDA drafts its own regulations, Peace and Weintraub both say it's important for consumers to educate themselves as much as possible about the products they are buying and look for manufacturers that are transparent.

"If you call a company and you asked for their certificates of analysis or 'C of A,' they should be willing to share that with you. If they are not, I would run for the hills," Weintraub said.