CBD Is Common. Is It Safe Or Legal? 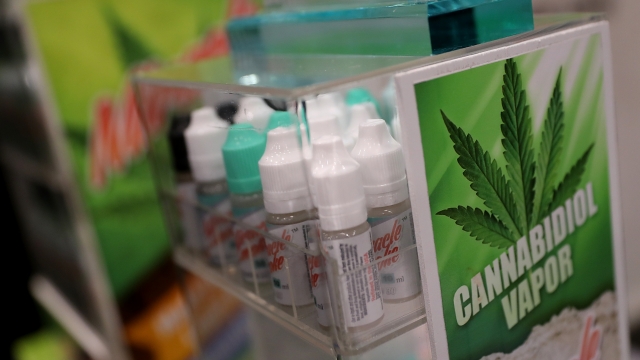 SMS
CBD Is Common. Is It Safe Or Legal?

By Kellan Howell
May 30, 2019
CBD seems to be everywhere now but a lack of clarity from the federal government has led to some questions over its safety and legality.
SHOW TRANSCRIPT

If you've heard the letters CBD without being quite sure what they mean, you're not alone. The cannabis extract has quickly made its way onto store shelves in foods, soaps, skincare and countless other products.

But many people are confused about its uses and legality, including the government.  And experts warn this uncertainty could lead consumers to buy products that might not be safe or even land them in jail.

"I think many consumers when they go into a store and see something on a shelf and they can buy it with their credit or debit card, they assumed that there's no legal consequences with that... So, I think it comes as a great surprise to consumers when they hear that, there are still arrests being made for CBD," said David Mangone, director of government affairs and Council for Americans for Safe Access, a medical cannabis advocacy group.

CBD, or cannabidiol, is a non-psychoactive chemical component of the cannabis plant. It won't get you high.

It can be extracted from both hemp and marijuana. The two plants are both members of the cannabis plant family, but marijuana contains much more of the psychoactive component THC and it is still considered federally illegal.

Now hemp and CBD extracted from it are legal nationwide under the 2018 Farm Bill.

Most states, though, have yet to change their laws to match federal rules.

In April, police arrested a 69-year-old woman at Disney World for possession of CBD and officers at Dallas/Fort Worth detained a 71-year-old woman overnight for traveling with CBD oil in May.

"I think the issue with that is up until very, very recently, the Drug Enforcement Administration has outright said that CBD is an illegal substance," Mangone said. "They have since softened that position a little bit ...they still haven't issued clear guidance on what's allowed and what's not."

Some government agencies are just now starting to clarify their positions on CBD.

Barbara Carreno, a spokeswoman for the drug enforce Administration, told Newsy that the agency will not prosecute CBD users for simple possession and instead said they are focused on catching major drug traffickers.

The Transportation Security Administration recently updated its policy on medical cannabis and said hemp-derived CBD products may now be carried on planes under certain circumstances.

In a legal opinion issued in May, the U.S. Department of Agriculture said the legalization of hemp under the 2018 Farm bill is "self-executing," meaning there's no further action required from federal agencies to make the legal change.

But there's still a big piece of the puzzle missing; most of the CBD products that are on the market now aren't regulated by the Food and Drug Administration and manufacturers are flooding the shelves with products anyway.

With so many unregulated products out there, experts say it’s almost impossible for consumers to know what they are getting and whether or not it's actually legal.

"I think the more unregulated products there are in the market, the higher chances there are that you could be purchasing something that can put you into a legal situation, where you could be arrested or prosecuted just because of you may not know if there's THC in there, you could have an employment drug test," Mangone said.

The FDA has issued several warnings to CBD companies, including three in April, over unsubstantiated claims they made on their product labels.

Changes could be coming soon. The FDA is holding public listening sessions with stakeholders in the hemp and CBD industries with the goal of creating new guidelines for product regulations.

The USDA is also expected to issue new regulations for hemp production later this year.