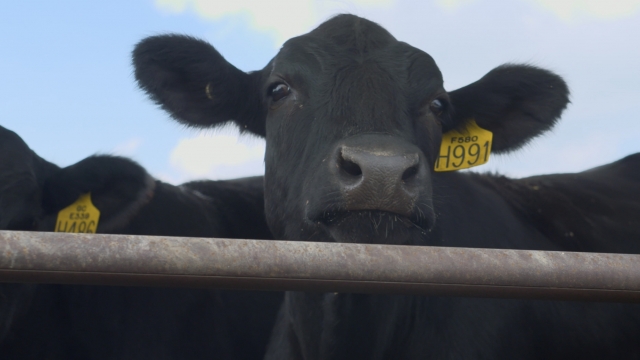 When it comes to sunrises in the flint hills of Kansas, no filter is necessary. Cattle have grazed these grasslands for over a century. And Debbie Lyons-Blythe, a cattle rancher of a certified Angus herd, wants to keep it that way.

"When you talk about cattle ranching and the importance of what we do, it's really about being an environmentalist," Lyons-Blythe said.

She says the cattle industry can be a solution to the climate crisis.

"Here on our ranch, there's a number of things that we do, and the first thing is to maintain the prairie," Lyons-Blythe said.

Prairie land like hers actually helps remove greenhouse gases from the air and stores them in the ground. Their roots act like a giant storage unit. It isn't fertile land for crops, but cows make it useful by grazing on it.

"Grasslands are vitally important because we don't plow them. We don't till them under. We don't release their carbon. So they're sequestering carbon all the time," Lyons-Blythe said.

Housing developments have devoured grasslands across the U.S. Lyons-Blythe says her cows are helping protect this patch of the prairie.

In another part of Kansas, cattle rancher Brandi Buzzard has had to work hard to regrow her ranch's grass. So far, it's taken six years.

"I mean look at it. That's up to my hips on some of those. That makes me so happy to see that because that's healthy grass. If you want a picture of healthy grass — that's healthy," she said. "On our ranch, we're big advocates of rotational grazing, which means that the cattle don't stay on a pasture for, you know, like two or three months at a time."

That process allows cows to essentially harvest the grass without destroying its root system.

Plus, her ground is fertilized — the natural way. Her cows drink water from solar-powered pumps. And crop land used to supplement the cows' diet is always growing something, to keep carbon in the ground. This season it's alfalfa.

After a cow grazes on grasslands, they typically will come to a feedyard. This is an image we're used to seeing, but there tends not to be a lot of information on how they really operate.

"We provide a service for America's farmers and ranchers, primarily family-owned operations," Tiffany Cattle Company owner Shawn Tiffany said. "They send us their cattle for the final stage in the beef supply chain, and we'll have these cattle for 120 to 150 days prior to them going to harvest and ending up on dinner plates all over North America, Europe and even parts of Asia."

They grow most of their feed. Once harvested, they'll plant cover crops to keep carbon in the ground. They run a no-till operation and allow cattle to graze on the lands they steward.

"As far as sustainability goes, I frankly prefer the word regenerative," Tiffany said. "I don't want this operation when I hand it off to my children someday to be something that I just sustained. I want it to be better."

Both ranches and feedyards use genetics and nutrition to reduce methane emissions.

"So if you're using genetics for cattle that have better growth, those cattle will reach their endpoint weight," Buzzard said. "You know, the way at which we harvest them faster and thereby ... they're not using resources as long in their life cycle."

Scientists are even looking into feeding cows some seaweed, which may help reduce emissions.

John Butler owns 16 feedyards and is the former chair of the U.S. Roundtable for Sustainable Beef.

"We need to benchmark what kind of impact we're having. And that's the stage we're sort of in right now," he said. "We set goals of reducing and being more efficient, but we've got to really understand where we are today."

It's an effort the entire industry has to buy into.

It seems to be a rallying cry.

"I look at this sustainability effort initiative, momentum — whatever you want to call it — as an opportunity for us to work closer together in our beef supply chain than we ever have," Butler said.

"Well, there's a tremendous amount of opportunity to advance everything in agriculture, whether that be our soil health or our climate impact and all these things and the people that I know in agriculture are passionate about that," Tiffany said. "I know I am."

Passion to protect not only these prairies and the cows that depend on them, but the climate as well.