Cats vs. Cucumbers: Why Are Felines So Scared Of Produce? 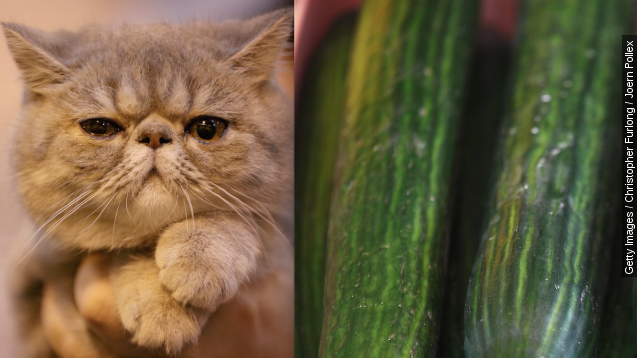 SMS
Cats vs. Cucumbers: Why Are Felines So Scared Of Produce?
By Cody LaGrow
By Cody LaGrow
November 19, 2015
Yes, scaring your cat with cucumbers is entertaining, but experts say it could cause unnecessary stress.
SHOW TRANSCRIPT

It's a hobby for those lacking social lives everywhere: using cucumbers to horrify the hairballs out of cats.

Normally, scaring a human requires a lot more work than just setting a phallic-shaped food on the ground. So, why are these pussycats so frightened by future pickles?

Theory one: the pure element of surprise. Cats don't expect anything creepy and are startled. That's something we humans have dedicated entire shows to.

Theory two: suspicion of the unknown. Dr. Roger Mugford, an animal behavior specialist, told The Telegraph that kitties aren't actually scared of cucumbers, just suspicious of danger. The tabbies could initially think it's a snake or another predator.

Theory three: Cats associate the places they eat with safety and security. That's according to Pam Johnson-Bennett, author of "Think Like a Cat." She told National Geographic that ruining this sort of sanctuary is "a cruel thing to do." (Video via Purina)

Animal behaviorist Jill Goldman agreed and said scaring little Whiskers could make your cat injure itself, break something or lead to prolonged stress.

My advice: Stop frightening felines and go scare human friends. If you make your posse mad, they're less likely to intentionally urinate in your bed.