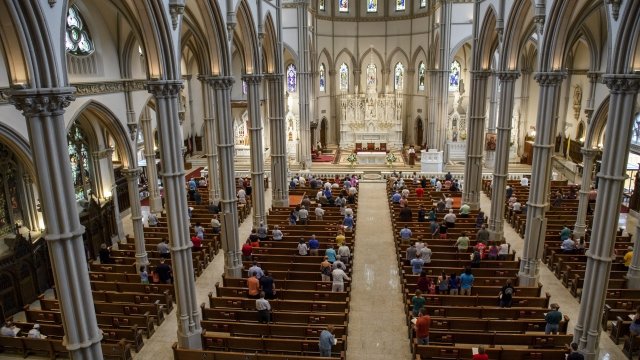 SMS
Catholic Dioceses Throw Support Behind Compensation Fund For Victims
By Katherine Biek
By Katherine Biek
August 31, 2018
One bishop told reporters he's prepared to work with state lawmakers to establish a fund that would be administered by a neutral third party.
SHOW TRANSCRIPT

A Pennsylvania bishop supports the creation of a compensation fund for victims of clergy sex abuse.

Bishop Lawrence Persico told reporters Thursday that he's prepared to work with state lawmakers to establish a fund that would be administered by a neutral third party.

The heads of two other Catholic Dioceses in Pennsylvania also said they're open to talks about the possibility of creating a fund.

Talks of compensation come more than two weeks after a grand jury report said more than 300 Catholic priests in Pennsylvania had been credibly accused of abusing more than 1,000 children.

And earlier this week, Pennsylvania Attorney General Josh Shapiro said his office has already received more than 700 calls on a clergy abuse hotline it set up after the report was released.

Instead of a compensation fund, state Rep. Mark Rozzi is pushing for a legislative change. He's sponsoring a bill that would create a two-year window for victims to sue in court no matter how long ago the abuse happened. Lawmakers in the House are expected to consider the bill when they return to work in September.