Catastrophic Flooding In The Appalachian Mountains 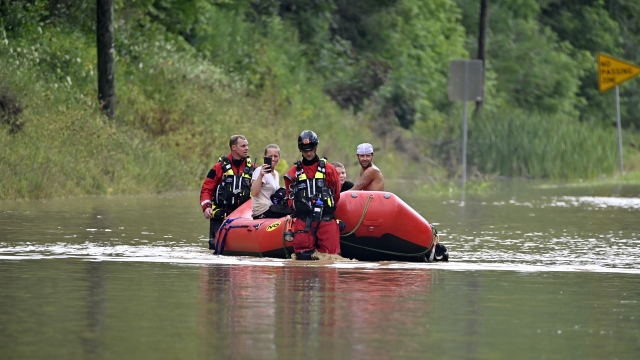 In eastern Kentucky, between eight and 10 and a half inches of rain fell in a 48-hour period.

"We're hoping the houses don't go but that's a strong possibility," said Paul Francis, who was rescued from his home.

It's going to be a real hard time for people.

Main streets are cut off, an auto repair shop is submerged and other business owners are measuring damage levels in feet, not inches.

More than 50 air rescues and hundreds of water rescues are happening across the state.

"I'm just glad to get out of there, but I'm going to lose everything I have for sure, but it's better than losing my life," said Bevery Daughtery, who was rescued from floodwaters.

"Floodwater work is always difficult because it's constantly changing and you don't know if the water is coming up or coming down," Lotz said.

Search and rescue will continue.

Accurate numbers of those still missing are difficult to come by, and cell service is spotty and power is out.

Sally is still searching for her best friend's daughter.

"It's hard to think about anything else. Right now we are in search and rescue which needs to be done by professionals. If you want to help, get in touch with one of these groups,"said Kentucky Governor Andy Beshear.

But before that, more rain is expected on Sunday for this already waterlogged area.

"That weather should remind us that this isn't over," Beshear said.

Governor Beshear is predicting it could take more than a year to fully rebuild, with many families in this already financially strapped area losing everything.