A Region In Spain Took A Step Toward Secession 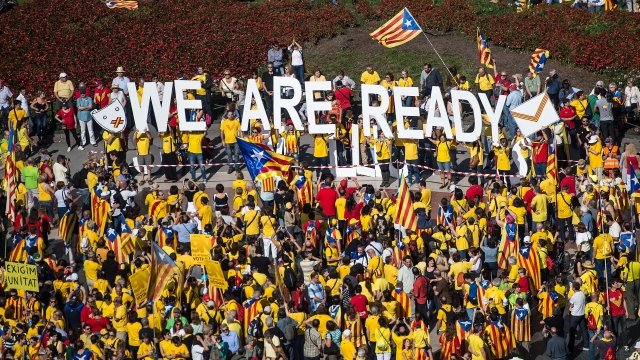 The northeast corner of Spain might become its own country.

On Wednesday, the Parliament of Catalonia approved a law that calls for a regional vote on whether or not to secede.

Catalonia is home to Barcelona. It has a distinct language and culture from the rest of the country.

Many Catalan people feel the region is too heavily taxed and doesn't get enough in return from Spain's federal government.

The measure technically passed unanimously — 72-0 — but that's only because the 52 opposition members of Parliament walked out after a contentious debate.

Catalonia has been working toward independence for years. In a 2014 symbolic referendum, 80 percent of voters said they wanted to break away from Spain.

Still, Catalan leaders say they're moving ahead with their plan and scheduled an independence vote for Oct. 1. But it's unclear if leaving will be as popular as it was in 2014.

A July poll found 49 percent of Catalans did not want to leave Spain, compared with 41 percent who did. But a more recent poll showed that if about 50 percent of the people showed up to vote, more than 70 percent of them would vote yes.