Catalonia Pushes Forward On Its Last-Ditch Effort For Independence 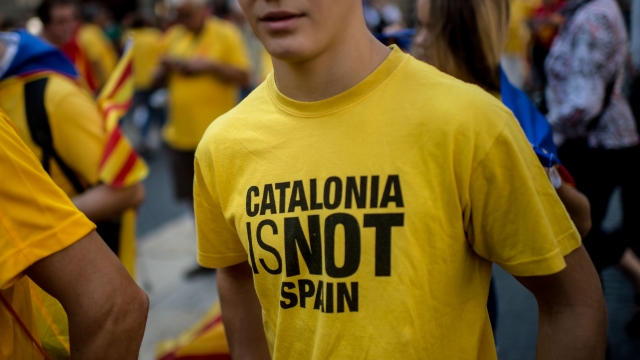 SMS
Catalonia Pushes Forward On Its Last-Ditch Effort For Independence
By Lindsey Pulse
By Lindsey Pulse
June 9, 2017
The leader of Catalonia said the referendum vote is Oct. 1. It's the country's latest push to separate from Spain.
SHOW TRANSCRIPT

On Oct. 1, 2017, voters will decide once and for all if the region should leave Spain and become an independent republic.

Right now Catalonia is considered an autonomous region within the Spanish state, but a lot of people want that to change.

Catalonia's attempt to break away dates back to the early 1900s. The then-ruler declared the Catalan Republic in 1931, but quickly withdrew it in exchange for autonomy.

It's been a long road since then. Madrid and the Catalan region have been at each other's throats for decades in the battle over Catalonia's independence.

There are a few reasons Catalonia wants to leave, but a lot of it comes down to money. It's one of the wealthiest regions in Spain, and some argue Madrid taxes it unfairly because of that.

But the Spanish government won't let the referendum happen without a fight. Madrid still has constitutional power to interfere with Catalonia's government and suspend its power.

Catalonian leadership actually tried to stage a referendum in 2014, but the Spanish government said it was illegal. Still, the region held a symbolic vote, and 4 in 5 voters supported sovereignty.