Violent Protests Break Out In Barcelona Over Catalonia's Independence 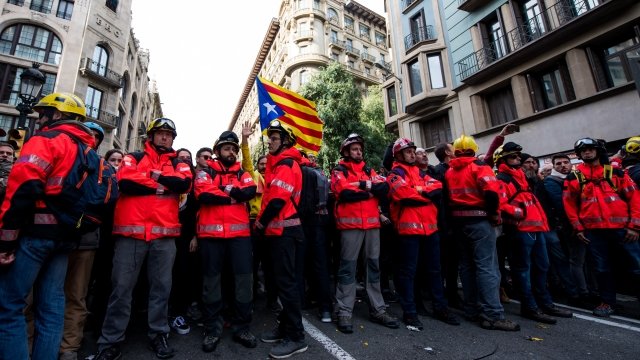 SMS
Violent Protests Break Out In Barcelona Over Catalonia's Independence
By Audrey Esther
By Audrey Esther
December 21, 2018
Thousands of pro-independence protesters took to the streets in Spain over the Catalan region's desire to secede.
SHOW TRANSCRIPT

On Friday, thousands of protesters took to the streets in Barcelona, Spain over the Catalan region's demand for independence.

Some of the clashes between the pro-independence protesters and police turned violent. At least eleven people were arrested and 30 were injured.

The protests happened on the same day Spanish prime minister Pedro Sanchez held a weekly cabinet meeting in Barcelona. While there he also met with Catalonia's leader Quim Torra.

In a joint statement issued after the meeting, the two leaders said, in part, that "although they maintain notable differences over the future of Catalonia," they share, "a commitment to an effective dialogue that conveys a political proposal and has the backing of a large part of Catalan society."

In October 2017, the region held a referendum for its independence, but Spain's constitutional court declared it illegal.

Catalonia has wanted to split from Spain for decades, which analysts say may be primarily for economic reasons. According to some estimates, Catalonia accounts for about 20 percent of Spain's economic output.