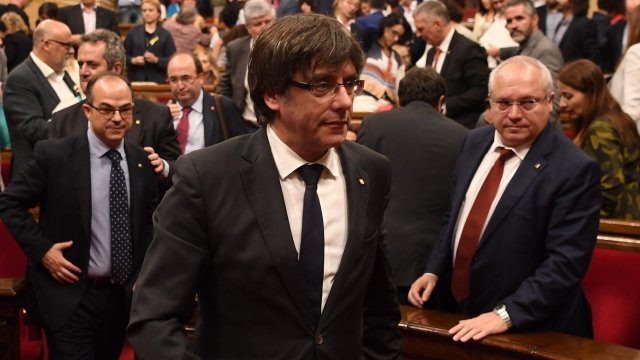 The five former officials had fled to Belgium and face rebellion charges in Spain.

Five Catalan leaders involved in a squashed independence referendum turned themselves in to authorities Sunday.

Ousted Catalan president Carles Puigdemont and four of his former advisers surrendered to Belgian authorities after fleeing Spain. They face charges of rebellion, sedition, misuse of funds, disobedience and breach of trust.

Catalonia, one of Spain's wealthiest regions, enjoyed a high level of autonomy before it held a nonbinding independence referendum Oct. 1. Less than half of the region's eligible voters participated, but around 90 percent of the roughly 2.26 million people who did vote supported independence from Spain. The referendum made international news when hundreds of voters were injured when Spanish law enforcement stormed polling places and took ballot boxes.

Michael Fallon is one of 40 conservative British lawmakers named in a widely-shared spreadsheet alleging sexual misconduct.

Madrid imposed direct rule over the region last month. It removed Catalonia's leaders and scheduled elections for Dec. 21. Spain also issued EU arrest warrants for the deposed leaders. A Belgian judge has 24 hours to question Puigdemont and his former advisers and decide whether or not to keep them in custody. Belgian authorities would then have to decide whether or not to execute Spain's warrants.

Belgium doesn't have to execute the warrants, though. A country can reject an arrest warrant if there is a risk to the suspect's human rights — including discrimination based on politics.

Puigdemont has said he will not return to Spain unless he is promised a fair trial.