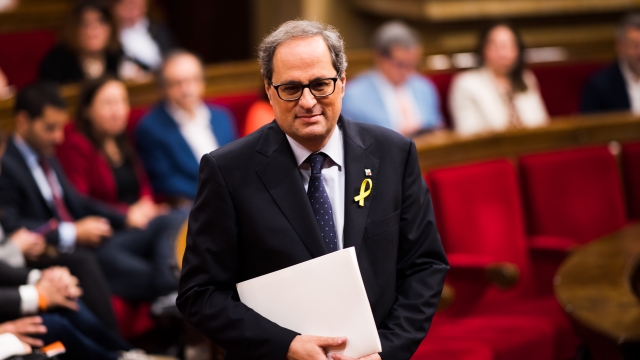 SMS
Catalan Leader Calls For Region's Independence As Protests Continue
By Katherine Biek
By Katherine Biek
October 17, 2019
President of Catalonia Quim Torra wants the region to split from Spain by the end of 2021.
SHOW TRANSCRIPT

The president of Catalonia wants to make the region independent of Spain by the end of 2021.

Leader Quim Torra called for a new independence referendum during his speech to Catalonia's regional Parliament on Thursday. He said, "If we have been sentenced to 100 years in prison for putting out the ballot boxes, the response is clear: We'll have to put them out again for self-determination."

Torra was referring to the combined prison sentence of nine Catalan leaders who were handed jail terms this week for their roles in a failed attempt to split from Spain back in 2017.   Spain deemed that referendum illegal, dissolved Catalonia's parliament and took direct control of the region.

On Monday, Spain's Supreme Court found all nine separatist leaders guilty of sedition and sentenced them to spend between nine and 13 years behind bars. Three other defendants were fined and banned from public office for 20 months for disobedience.

The court's decision sparked multiple days of violent protests throughout Barcelona and other parts of Catalonia. Demonstrators have set fires to cars, trash cans and barricades. Some have also reportedly thrown rocks, firecrackers and gasoline bombs at police. Officers have detained dozens of people so far.

Torra — who's peacefully marched alongside some of the protesters — has blamed the unrest on what he called "infiltrators" who are trying "to destroy the image of the independence movement."