Castro And Obama Are On The Same Page About The Embargo 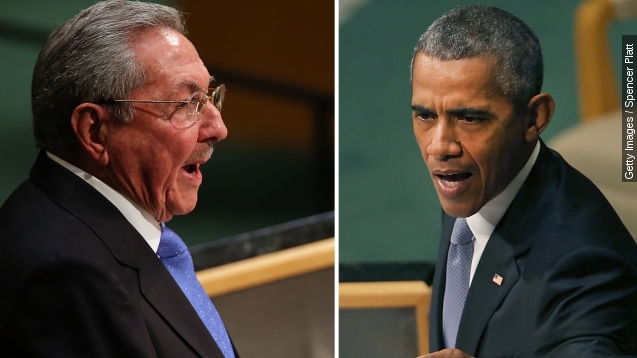 SMS
Castro And Obama Are On The Same Page About The Embargo
By Matt Picht
By Matt Picht
September 28, 2015
President Obama and Cuban President Raul Castro both used their U.N. speeches to campaign for the end of the Cuban trade embargo.
SHOW TRANSCRIPT

When President Obama sits down with Cuban President Raul Castro on the sidelines of the UN General Assembly, both men will have one primary concern on their minds: the U.S. trade embargo on Cuba. (Video via The White House)

Castro railed against the Cold-War-era blockade and other elements of U.S. foreign policy during his speech, saying its removal was a crucial step to normalizing relations between the two countries. (Video via United Nations)

And his comments found a receptive audience — the U.N. has condemned the embargo for the past 23 years, with 188 countries symbolically voting against the blockade last year.

Typically, the U.S. and a few allies oppose the resolution, but this year things are different.

"I'm confident that our Congress will lift an embargo that should not be in place anymore," Obama said.

The Obama administration has recently been moving to break down trade and travel barriers between the two countries. The trade embargo, often criticized as expensive and ineffective, has been a target from day one. (Video via U.S. Department of State)

But only Congress has the power to completely remove the embargo, and plenty of lawmakers still support the blockade.

"The Cuban people are no more free today than they were before Obama's terrible deal," Rep. Ileana Ros-Lehtinen said after relations were first normalized.

The U.S. is reportedly considering abstaining from the annual U.N. vote on the Cuban embargo, marking a rare instance where a country does not actively oppose a UN resolution condemning its policies.