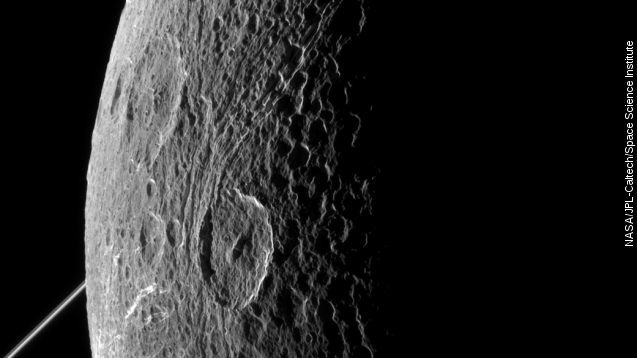 SMS
Cassini Probe Has Close Encounter With Saturn Moon Dione
By Evan Thomas
By Evan Thomas
June 21, 2015
Cassini has captured detailed images of the surface of Dione, one of Saturn's moons. They are the latest images in a nearly 11-year science campaign.
SHOW TRANSCRIPT

The Cassini space probe just grabbed some of the closest images yet of Saturn's moon Dione.

The probe passed within 321 miles of the surface and captured its craters with a visible-light camera.

This is Cassini's second-to-last planned visit to Dione and its second-closest approach to date. In 2011, it was just 60 miles above the surface.

Cassini made orbit at Saturn in July of 2004, where it started a four-year primary mission. Mission planners have since extended the probe's operations through 2017. (Video via NASA)

They hold it up as the most ambitious planetary exploration mission ever. In its now nearly 11 years of science, Cassini has studied Saturn's rings and moons, its atmosphere and its magnetic field.

Early in its visit it also dropped the Huygens probe onto the surface of Saturn's largest moon, Titan. (Video via NASA)

"By studying the satellites in the Saturnian system we begin to understand something also about the origin of the Solar System," said a NASA scientist. (Video via NASA)

2017 is the end date because encounters with Titan will eventually alter Cassini's orbit enough to send it into Saturn's atmosphere.

Until then, it will be collecting more images of the planet and its moons and setting up for a final orbit that sends it between Saturn and the planet's rings.