Ben Carson Will Be Trump's Secretary Of Housing And Urban Development 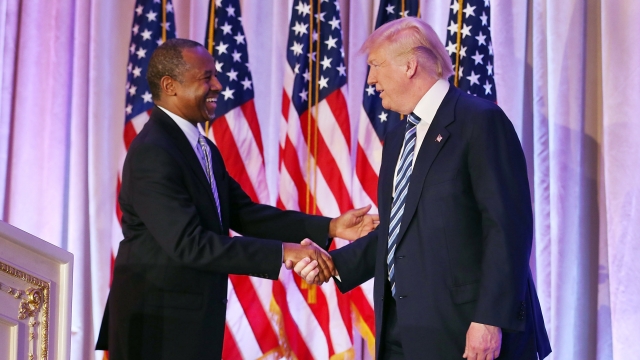 SMS
Ben Carson Will Be Trump's Secretary Of Housing And Urban Development
By Ethan Weston
By Ethan Weston
December 5, 2016
Ben Carson said he didn't want a position in Trump's administration. Then he accepted a job as secretary of housing and urban development.
SHOW TRANSCRIPT

It looks like Ben Carson has changed his mind — he will be taking a position in President-elect Donald Trump's administration after all.

On Monday, Trump announced Carson as his pick for secretary of housing and urban development in the new administration.

Almost two weeks ago, Trump tweeted he was "seriously considering" the former Republican presidential candidate for the position.

Carson followed suit the next day with a Facebook post hinting he would take the position. He wrote he felt he could make "a significant contribution, particularly to making our inner cities great for everyone."

"I grew up in the inner city and have spent a lot of time there ... and recognize that we cannot have a strong nation if we have weak inner cities," Carson told Fox News.

Carson — a retired neurosurgeon — turned down a previous offer to serve as secretary of health and human services.

Carson previously said he didn't want to be "pigeonholed into one particular area" and that he'd rather work "from the outside."