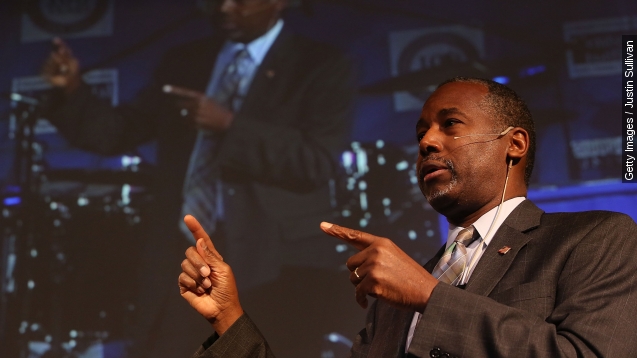 Ben Carson's having to explain changes made to a stabbing story he's told over the years.

Basically, the story goes like this: as a teen, Carson became angry and tried to stab another teenager. Fortunately for the boy, a belt buckle ended up breaking the knife. (Video via Carson America)

"Another youngster angered me and I had a large camping knife, and I tried to stab him in the abdomen. ... But I was more terrified than he was, recognizing that I was trying to kill somebody over nothing," Carson said at the Faith and Freedom Coalition Conference.

But things like where the incident took place and how well he knew the other boy have differed. Sometimes the other boy is described as a friend, but Carson has also described him as a more anonymous classmate that picked on him.

Carson likened the discrepancies to a game of telephone. He told BuzzFeed: "Have you ever played that party game where you whisper into the person’s ear and then they tell it, and by the time it gets all the way back around it’s a different story? That’s what we’re talking [about] here."

The Daily Beast puts the first instance of Carson making the story public in 1996 in two of his books, saying it was a pivotal moment in his development.

More recently, Carson used the story in response to Donald Trump's criticism that he’s too low energy. (Video via NBC)

"I do have a tendency to be relaxed. I wasn't always like that. There was a time when, you know, I was very volatile, but, you know, I changed," Carson said in a Meet the Press interview.

This video includes images from Getty Images and Zondervan.