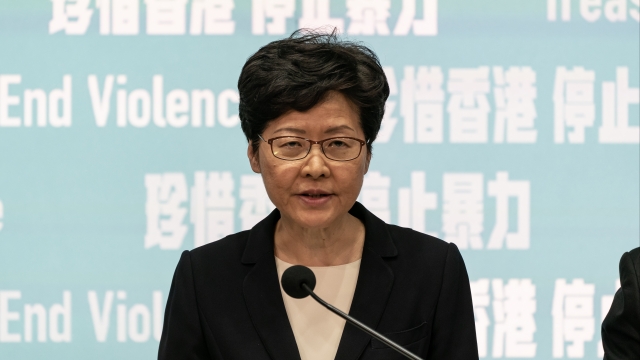 The protests in Hong Kong show no signs of slowing down. And leader Carrie Lam is warning she could seek Chinese military intervention if the situation gets worse.

"At this point in time, I still strongly feel that we should find the solution ourselves. That is also the position of the Central Government: that Hong Kong should tackle the problem on her own. But if the situation becomes so bad then no options could be ruled out if we want Hong Kong at least to have another chance," Lam told reporters.

Lam also said her government does not have plans to use emergency powers to introduce more laws. This comes after she banned protesters from wearing masks with a British colonial-era law that hasn't been used since 1967.

The ban sparked a weekend of violence throughout the city. Protesters set fire to subway stations and businesses. Hong Kong's entire metro system shut down, supermarkets and banks closed, and dozens of people were hospitalized. One of them was a 14-year-old boy who was shot by an undercover police officer.

Thousands of Chinese troops are currently stationed in Hong Kong. Beijing's maintained a military presence there since 1997 — that's when the former British colony was handed back to China.

But its military cannot get involved in the protests until it gets permission from the Hong Kong government. There is a workaround to this constitutional requirement — China could instead unilaterally declare a state of emergency in Hong Kong, allowing it to take control of the city.

Lam would not elaborate Tuesday on how "bad" the protests would need to get in order for her to call on help from the mainland.