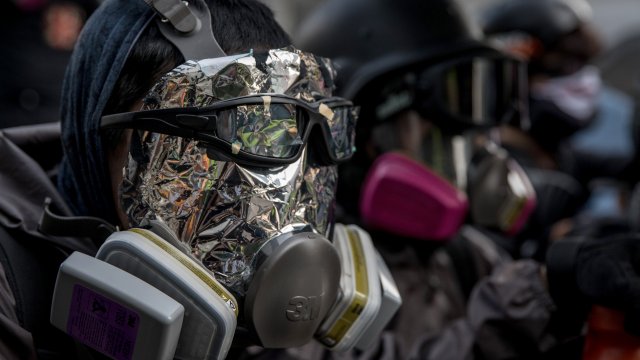 The sights... and sounds... of protests have taken over Hong Kong for over four months. Spotted in all of this are masks, worn by pro democracy protesters— for anonymity and protection.

But now, "the Chief Executive in council decided at a special meeting this morning to invoke the power under the Emergency Regulation Ordinance and make a new regulation in the name of Prohibition on Face Covering Regulation, which is essentially an anti-mask law."

Hong Kong's leader Carrie Lam banned protesters from wearing masks with a British colonial-era law that hasn't been used since 1967.

The law will come into effect Saturday, according to a government press release. It applies to both unlawful and police-authorized assemblies.

A person who breaks the law faces a $25,000 Hong Kong Dollar fine and up to a year in jail.

A police officer can ask a person to remove a mask, resistance can lead to a $10,000 Hong Kong Dollar fine and up to six months in jail.

There are exceptions, according to the press release, for medical masks or work-related masks and religious face coverings.

The government says the law is urgently needed for "police investigation and collection of evidence and for deterring violent and illegal behavior." Yet Lam says Hong Kong is not under a state of emergency.

This comes after police shot a teenage protester at demonstrations for China's 70th anniversary of the founding of the People's Republic of China.

Lam said over 1000 people including 300 police have been injured since protests began over a now-killed extradition bill in June.

The executive leader faces calls to resign, as she remains in a power struggle between mainland China and the people of Hong Kong who reject its control.