Cardinal Wuerl Will Discuss His Resignation With The Pope 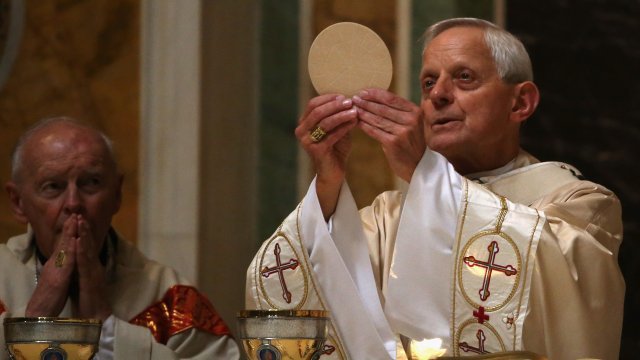 SMS
Cardinal Wuerl Will Discuss His Resignation With The Pope

By Gabrielle Ware
September 12, 2018
The cardinal is facing calls to resign amid allegations he mishandled a sexual abuse scandal in the church.
SHOW TRANSCRIPT

Cardinal Donald Wuerl the archbishop of Washington, will ask Pope Francis to accept his resignation, according to an archdiocese spokesperson. The request comes amid allegations he mishandled a sexual abuse scandal in the church.

The cardinal is the former archbishop of Pittsburgh. A grand jury report came out last month that said 300 priests belonging to Catholic dioceses in Pennsylvania have been credibly accused of abusing more than 1,000 children.

The report said Wuerl allowed several of the accused priests to continue serving in the church even after rebuking the behavior.

Wuerl is also facing scrutiny over what he may have known about abuse allegations against his predecessor, former Cardinal Theodore McCarrick. McCarrick resigned after facing multiple accusations of molestation and sexual misconduct.

Wuerl has denied knowing anything about the accusations until recently. Still, he's faced harsh criticism and resignation calls from dozens of parishioners and at least one clergyman.

In a letter Tuesday, Wuerl said he'd meet with Pope Francis to discuss the resignation he presented nearly three years ago, but was not made to act on.