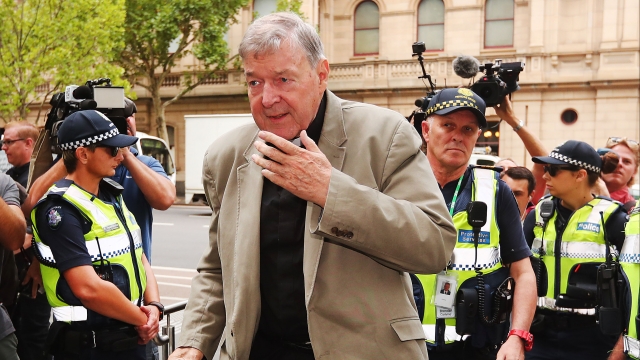 SMS
Cardinal George Pell Loses Appeal Against Child Sex Abuse Conviction
By Katherine Biek
By Katherine Biek
August 21, 2019
Tthe judges who upheld Pell's conviction said they "did not experience a doubt" about the verdict after reviewing all of the evidence.
SHOW TRANSCRIPT

An Australian appeals court rejected Cardinal George Pell's appeal on Wednesday to have his conviction for child sexual abuse overturned.

Pell is the Vatican's former treasurer and the highest-ranking figure within the Catholic Church to be convicted of child sex abuse.

Pell was sentenced to six years in prison back in March after he was found guilty of abusing two boys in the late '90s. A jury found him guilty on one count of sexual penetration of a child and four counts of an indecent act with or in the presence of a child.

In his appeal, Pell's lawyer told the court it was "impossible" for his client to have committed the crimes as they were laid out during trial. As such, they argued the jury could not have found him guilty beyond a reasonable doubt. Pell's lawyer also argued that he wasn't arraigned in front of the jury as required.

But the judges who upheld Pell's conviction said they "did not experience a doubt" about the verdict after reviewing all of the evidence.

A spokesperson for Pell, who's long maintained his innocence, said the cardinal will consider whether he wants to appeal Wednesday's ruling in Australia's High Court. He'll be eligible for parole in 2022.