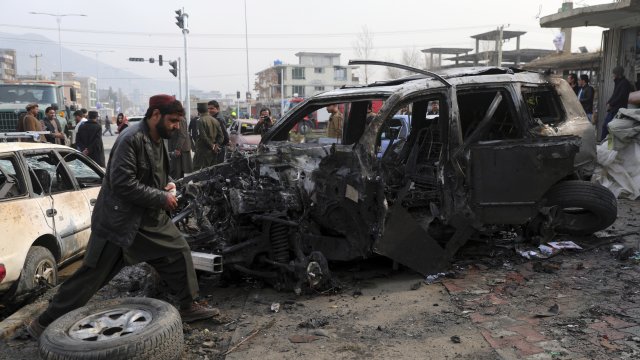 SMS
Bombings Rock Afghanistan Amid Peace Talks With Taliban
By Alex Arger
By Alex Arger
December 20, 2020
The Afghan bombing adds to the current rise in violence and bombings in the country as its government and the Taliban try to end a nearly 20-year war.
SHOW TRANSCRIPT

Bombings have rocked Afghanistan in recent days, including one that killed 11 children and another that targeted an Afghan lawmaker on Sunday.

The blast damaged nearby buildings, shops, and civilian vehicles.

Afghanistan's rise in violence and bombings comes as its government and the Taliban try to find an end to their near 20-year-long war. At least four other bombings were reported Sunday, and one Friday planted in a rickshaw killed at least 15 civilians, including 11 children.

While there's no evidence the Taliban is responsible for Sunday's bombing, Afghan's president mentioned the group in a statement, saying they should stop violence against civilians and accept a ceasefire to bring peace. The Afghan interior ministry said the Taliban has killed 487 civilians and injured more than 1,000 in the last three months.