Captain And Tennille Split After 39 Years Of Marriage 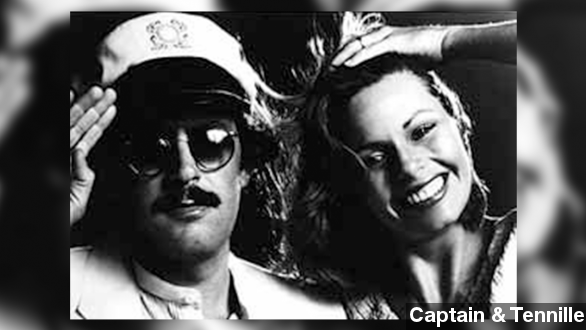 SMS
Captain And Tennille Split After 39 Years Of Marriage

By Mikah Sargent
January 23, 2014
The iconic musical duo has announced they're set to divorce.
SHOW TRANSCRIPT

Seventies singing duo Captain & Tennille are getting a divorce.

Yes, the pair that brought you "Love Will Keep Us Together" and "Do That To Me One More Time." Sad and ironic. (Via Universal Music Group / Captain & Tennille)

Apparently the Captain didn't see it coming. He told TMZ: "I don't know why she filed. I gotta figure it out for myself first." He even said the two are still living in the same house.

Although someone did update the duo's website with information about the divorce, writing: "Almost all people naturally evolve over time, & sometimes hidden feelings start to be uncovered." (Via Captain & Tennille)

Captain & Tennille haven't released any new music since 2007 due to Dragon's health problems.