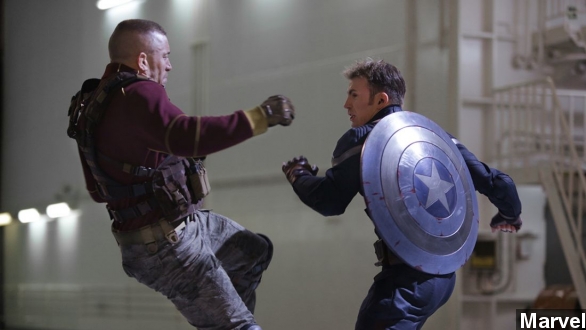 By Steven Sparkman
April 6, 2014
The latest installment in Marvel's "Avengers" franchise made an estimated $96.2 million its opening weekend. What are fans saying about it?
SHOW TRANSCRIPT

We all know superhero movies are a big draw these days, but Captain America 2 managed to beat out November's Thor sequel and almost tie the first Iron Man movie. So what is it about Marvel's golden boy?

The reviews tend to praise the cast, saying things like "Chris Evans as ... Captain America has an innocence that should be patented," and "Scarlett Johansson is the best actress in action movies today." (Via The Huffington Post, NBC)

But there's also the directors' well-known claim to have modeled the film on the classic 1970's political thriller. (Via IGN)

And just like last summer's "Star Trek: Into Darkness" was an allegory for post-9/11 militarization, and 2012's "The Dark Knight Rises" was an allegory for something or other, "Captain America: The Winter Soldier" tackles a modern-day issue: surveillance and government overreach. (Via Paramount Pictures, Warner Bros.)

The film was already shooting when Edward Snowden leaked information about the NSA, but it still kind of feels like that was an influence. (Via The Guardian)

The Russo brothers, the film's directors, told Mother Jones the movie's message "had to do with civil liberties issues, drone strikes, the president's kill list, preemptive technology" — all themes that have cropped up again and again in political discourse.

But aside from a few hammy conversations, the film manages to stay fun. Don't believe us? Listen to some more nerds!

"This is a super entertaining film. The action sequences are amazing. ... I mean, this movie's two and a half hours long, or 2:15, doesn't feel like it."