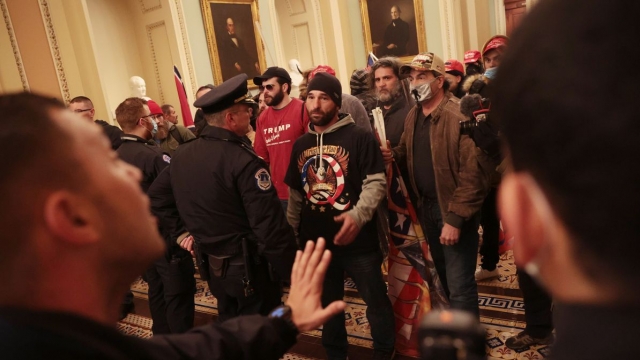 Two Senate Committees are set to release new reports next week on the security failures surrounding the January 6 Capitol violence. But they are leaving out President Trump’s role in inciting the riot. The lack of answers is insulting to many who defended the nation’s Capitol that day, including two officers who are speaking out about their experiences during the attack.

Reporter: "What was the worst thing they called you?"

"Why was that the worst thing?"

Aquilino Gonell, United States Capitol Police: "Because I served my country. I went overseas to protect our homeland form foreign threats, but yet here I am battling them in our Capitol."

United States Capitol Police Sergeant Aquilino Gonell immigrated from the Dominican Republic to the US at 12-years-old in 1991, deployed to Iraq in 2003. He joined the Capitol Police in 2008. He is speaking publicly for the first time about January 6th when he fought rioters trying to stop the certification of Joe Biden’s presidency.

Sergeant Gonell led members of the Department’s civil disturbance unit. For hours, they battled insurrectionists attacking the Capitol. This video captures his fight on the west front.

Gonell: "They kept saying, 'Trump sent me. We won't listen to you. We are here to take over the Capitol, we're here to hang Mike Pence...' They thought we were there for them and we weren't so they turned against us. It was very scary because I thought I was going to lose my life right there."

Some of the most horrific video shows Sgt. Gonell steps from Metropolitan Police Officer Daniel Hodges, caught in the doorway.

Gonell: "I could hear my fellow officers screaming. The agony in some of them. All I could think was we can't let these people in. There's going to be a slaughter inside."

Rioters beat Sergeant Gonell so badly they cut his hand and he needed foot surgery. While he fended off the attack outside, Officer Byron Evans locked down areas inside the Capitol and evacuated senators.

Q: "Did you ever think this might be a life or death situation?" Byron Evans, United States Capitol Police: "I remember specifically thinking it when I was on the floor. I remember thinking, all that stuff like, Byron, this is the day, all those times you've given thought on what you would do, you're doing it."

For hours, Evans and the Senators watched the riot on TV from a secured location.

Evans: "I just remember the anger I felt when I saw those images busting windows, climbing the walls and stuff like that, it was an audible gasp in the room."

Around six, the riot had calmed enough that Sergeant Gonell could finally tell his wife he survived.

Gonell: "I started texting my wife and I just said, "I'm okay. See you whenever."

Gonell: "When I came in, she wanted to hug me and I told her no because I was covered (chokes tears). I was covered in pepper spray. My hands were bleeding still, and I couldn't even sleep because I went and took a shower and instead of helping, that re-inflamed the chemicals." Q: "It had soaked through your clothes?" "Yes. I took a bath with milk that didn't help."

Just hours later that day, both he, Officer Evans and hundreds more officers still reeling from the worst attack in two centuries headed back to work.

Gonell: "I did give my wife a hug and started crying."

Gonell: "I didn't think i would be able to see them. I went to my son's bed and gave him a hug, he was asleep still. Gave him a kiss. And I just started crying.... for 5-10 minutes. I just cried. She kept telling me it was going to be okay. I'm like no, I've got to go back to work."

For him, the riot is hardly in the rear view. The failure of a bill to establish a commission to investigate the causes of the insurrection left him devastated and gave him a reason to speak out

Gonell: "It hurts me that the country that I love, that I came in, that I have sacrificed so much for, doesn't care about us. They don't."

To date, more than 400 people have been charged in the riot.