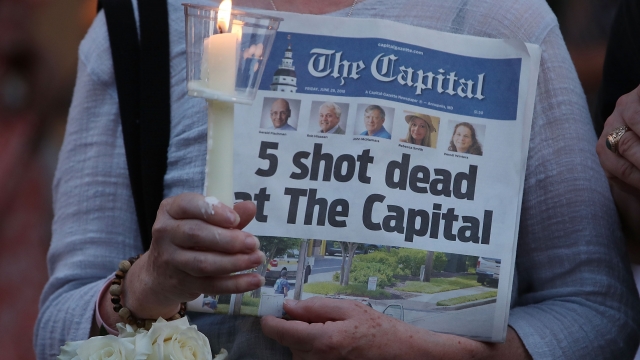 The gunman accused of killing five people in the Capital Gazette newsroom last year changed his plea to guilty in court on Monday.

Jarrod Ramos originally pleaded not guilty but later changed his plea to not criminally responsible, which in Maryland is essentially an insanity plea. On Monday he admitted to the crimes in court and changed his plea in all 23 counts to guilty. The judge accepted his plea.

Since Ramos has pleaded guilty, his trial will now focus solely on his mental state at the time of the shooting and determining whether he should be held criminally responsible. If his attorneys can prove he lacked "substantial capacity to appreciate" the criminality of what he'd done, he could be acquitted and committed to a psychiatric facility.

The Maryland Department of Health says Ramos was legally sane at the time of the shooting, but other mental health experts hired by Ramos' public defenders came to conflicting conclusions.

Before the shooting, Ramos lost a defamation lawsuit he filed against the Capital Gazette for publishing a column accusing him of harassment — a crime he's pleaded guilty to. Authorities say Ramos held a grudge against the paper, and they described the attack as vengeance.

A state attorney gave new details on the attack Monday. On June 28, 2018 Ramos traveled in a rental car to the newsroom. He brought smoke grenades, a shotgun, ammunition and devices to barricade doors. Video footage seems to show him checking the gun's flashlight and laser sight. Once he realized the newsroom's front door was locked, he shot through the glass doors and entered the newsroom, firing at staffers. Afterward, the attorney said Ramos dialed 911. When police arrived he reportedly surrendered and admitted to the shooting.

Evidence including a greeting card, a CD with photos of Capital Gazette employees —  some of whom were labeled "high value targets" — and surveillance video of the newsroom were presented in the case. Police also reportedly found an note in the pistol grip of Ramos' shotgun. They say it was an excerpt from a book reading: "There are very few problems in the world that cannot be solved by clear and concise communication. The remaining problems can be solved with the proper placement and application of high explosives."

The jury selection process will begin Wednesday. The trial is set for November.