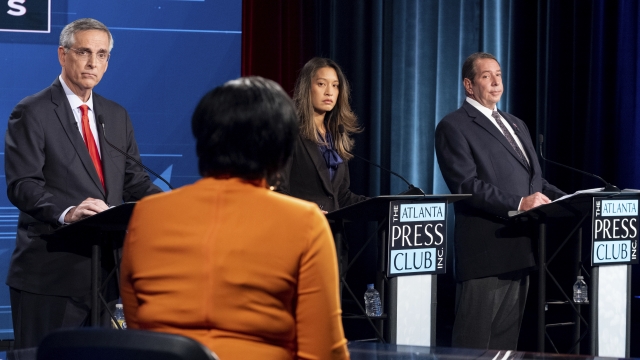 The debate about debates has become a bit of a political weapon, with candidates taking cues from others in their party.

This campaign season has already seen some noteworthy debate moments. But overall, there are fewer chances for candidates to have breakout moments, because fewer candidates are taking the stage to face their opponents.

"Most states, for their governor and their U.S. Senate seats, typically have at least three and sometimes more. Most are lucky now if they have one," said Jill Zimon, the executive director of the Ohio Debate Commission.

So why the change? Debate officials Newsy spoke with identified a few possible reasons.

In April, the Republican National Committee preemptively withdrew from the 2024 presidential debates, alleging bias at the commission in charge of organizing them.

"That signaling did seem to cause some problems within the party, or perhaps giving that tacit approval to eschew debates and skip them, which we do see happening at other levels in some races," said Elizabeth Bennion, the president of the Indiana Debate Commission.

The debate about debates has become a bit of a political weapon, with candidates taking cues from others in their party.

"I think candidates and campaign managers look around at their cohorts and figure out what are other people doing, which is kind of unfortunate, because I think you need to do what Ohio voters need. What do Indiana voters need? What do the Georgia voters need?” said Zimon.

It’s not unusual for incumbents to resist taking the stage, especially if they’re leading in the polls. But even if the race isn’t a close one, a debate can still be valuable for voters.

"Some incumbents are choosing to debate to make it clear to voters that they stand behind their convictions, and they are willing to share their positions publicly," said Bennion.

Taking the stage does come with some risk. It’s a scenario where candidates have to relinquish control, and a gaffe or viral moment could pull attention from the campaign’s central issues.

Polls have shown that debates don’t usually sway many voters, but they still serve an important role in our democracy.

"The texture of what a debate shows a voter provides information that voters cannot get elsewhere. We do know it only moves a small percentage, but in tight races, they become even more important,” said Zimon.