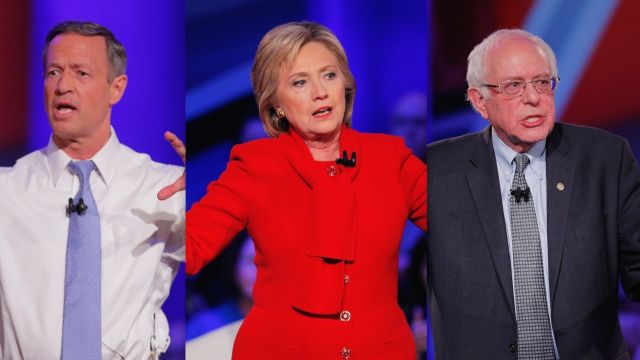 MSNBC and the largest newspaper in New Hampshire have added a Democratic primary debate to the schedule. Sort of. Maybe.

The debate, which is scheduled to take place Feb. 4, is unsanctioned by the Democratic Party, meaning any candidate who actually participates would be unable to attend any Democratic National Committee sanctioned debates. That rule has only been implemented during this primary, and networks have gotten around this rule by adding town halls, where the candidates are questioned alone by a moderator or the crowd.

Unsurprisingly, Gov. Martin O'Malley is all for it. He's been calling for more debates throughout the process. But front-runner Hillary Clinton is also pushing for the DNC to actually sanction the debate. (Video via Hillary for America)

"I would like the chairman of the party and the campaigns to agree that we can debate in New Hampshire next week. That is what I'm hoping will happen," Clinton said in an interview with MSNBC.

Currently, the DNC has scheduled six sanctioned debates; that's the same number they authorized in 2008, but allowing unsanctioned events boosted the number of debates to 25. Many have criticized the 2016 process, saying it's rigged to give Clinton a clear path to the general election. (Video via NBC)

So far, it doesn't look like the DNC is going to budge. But the MSNBC debate is just the latest backlash both national committees have faced on the primary process they've created for their candidates.

The Republican National Committee has already dealt with rogue candidates after the widely-criticized CNBC debate prompted some candidates to consider sidelining the RNC and negotiate their own debate schedule.

In response, the RNC suspended its partnership with NBC for a February debate. The RNC wanted to make sure the candidates knew it was listening to their concerns and, as Politico put it, make sure they knew "we have your back."

The DNC hasn't really done that during this campaign season. Calls for more debates have been, for the most part, ignored. But in a statement, the DNC says it will reconvene with the campaigns after the New Hampshire primary to "review" the schedule.