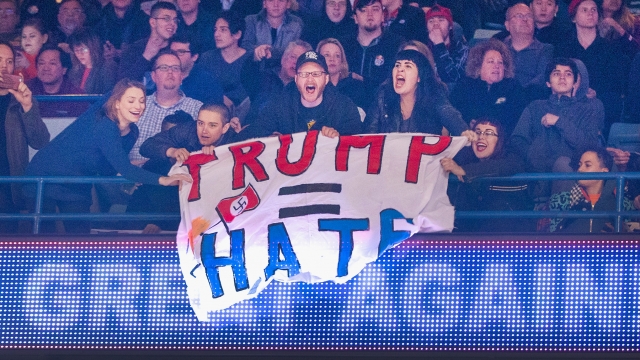 The Trump campaign cited safety concerns for both supporters and anti-Trump protesters.

Chaos broke out at after a postponed Donald Trump rally Friday night in Chicago.

Trump's campaign canceled the rally, citing safety concerns for thousands of supporters in the arena as well as anti-Trump protesters in and outside the arena.

Trump called into CNN and said his campaign didn't take responsibility for the violence.

"I'm not a person that wants to see violence. ... You have certain groups that are agitating groups that also, you know, these are people that cause problems," Trump told CNN.

WLS reported the cancellation came after it was discovered that thousands of undercover protesters had embedded themselves into the crowd.

Adding to the mayhem, a growing crowd of anti-Trump protesters blocked traffic outside. Police on horseback tried to sequester protesters, but news outlets reported altercations and police injuries.

This happened on the same day dozens were arrested at a Trump rally in St. Louis, where a bloodied man was seen being escorted away by police.

This video includes an image from Getty Images and a clip from WBBM.