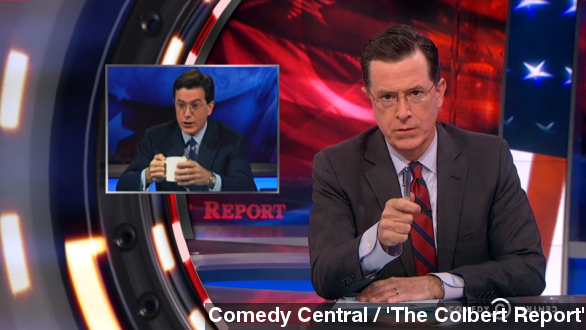 By Danny Matteson
March 28, 2014
Outcry over the tweet was swift, and soon the hashtag #CancelColbert had climbed to the top of Twitter's trending topics.
SHOW TRANSCRIPT

​Stephen Colbert is getting a wag of the finger from the Internet — over a tweet that some find racially insensitive.

Thursday, the Twitter account for Comedy Central's "The Colbert Report" posted a now-deleted tweet that read, "I'm willing to show the #Asian community I care by introducing the Ching-Chong Ding-Dong Foundation for Sensitivity to Orientals or Whatever." (Via Twitter / @ColbertReport)

And the word of the day quickly became "Twitter outrage."

Outcry over the tweet was swift, and soon the hashtag #CancelColbert had climbed to the top of Twitter's trending topics.

Some responses were angry, including this one from freelance writer and activist Suey Park. "#CancelColbert because there are 19 million of us and we will not tune in for race baiting." (Via Twitter / @suey_park)

Others, like comedian Jim Norton, claimed the tweet was taken out of context and those angered by the tweet were just looking for something to be offended by.

"People who support #CancelColbert ignore the context because they WANT to be offended. In America, outrage = empowerment. #Dopes, #Frauds" (Via Twitter / @JimNorton)​

And others still claimed the joke wasn't racist — just poorly put together. Mediaite writes: "Calm down, Nation. #CancelColbert is trending because a joke wasn't executed properly—it's about poor technique rather than poor taste."

The joke originated during an in-show segment Wednesday.

Colbert was lampooning the founding of the "Washington Redskins Original Americans Foundation" by Washington Redskins owner Dan Snyder. Snyder has insisted "Redskins" is not offensive. Then Colbert turned the joke on himself. (Via NFL)

For Colbert's part, he says he didn't write the tweet in question and wasn't sure who did — a claim the show's official Twitter account, run by Comedy Central, backs up.

Comedy Central has not yet commented on the Twitter flap, but a writer for Salon has offered what she considers a more constructive way to deal with similar Internet issues in the future.

"You don't like what you see in the world? Speak up about it. Shine a light on it. But don't insist that other people be shut down. … Start from the 'That's not cool' place and work from there, before going directly to the fight scene in 'Anchorman.'"