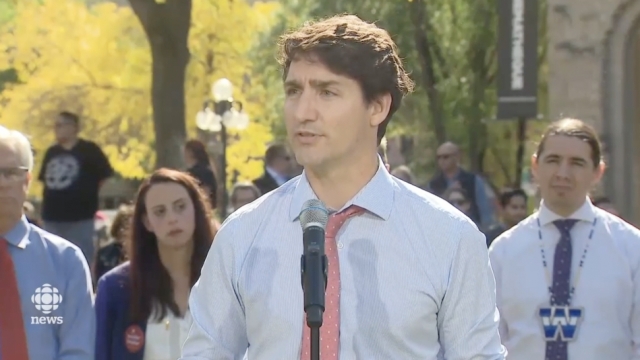 The prime minister said darkening his face and skin is "unacceptable because of the racist history of blackface." He said: "I appreciate calling it makeup, but it was blackface and that is just not right."

Time obtained the photo from a copy of a West Point Grey Academy yearbook where Trudeau was a teacher. The photo shows him with his face, neck and hands covered in makeup at an Arabian Nights-themed party in 2001. It also shows him wearing a turban and a robe at the "costume-themed" gala, dressing as a character from "Aladdin." According to Time, while others were also in costumes in the photos, no one else darkened their skin.

He apologized Wednesday night, saying he deeply regrets his actions and he takes responsibility. He also said he didn't realize it was racist at the time. During that apology, he admitted to another instance of wearing dark makeup, referring to a high school talent show where he sang the traditional Jamaican folk song "Day-O." He said he didn't recall any other instances. Later that evening, CTV News in Canada obtained the photo from a source who says it's a picture of Trudeau in a yearbook at Brebeuf College, where he attended high school.

And then on Thursday, a third exclusive, this time from Global News, showed a video from the early 1990's showing Trudeau in darkened makeup while laughing, sticking his tongue out and making faces.

Trudeau said he was embarrassed by the photos and video and says it doesn't represent the person he has become or the leader he tries to be. He said it comes from his "layers of privilege." He said he had trouble understanding discrimination back then, but over the years of representing and defending a community with so many different backgrounds is what made it clear to him that "further marginalizing by dressing up that way is absolutely unacceptable."

"It was something that minimizes and takes advantage of a reality that I have not had to live with. Of being discriminated against, of being marginalized, of being judged for the color of my skin, for my language, my background."

When asked, again, on Thursday, how many times he has worn "blackface" he didn't answer reporters.

Trudeau said he will continue to fight intolerance and discrimination, even though he made this mistake in the past. "I'm not that person anymore. I'm someone who understands the deep hurt caused by actions like that to people who live with discrimination every single day," Trudeau said.

The prime minister launched his re-election campaign last week and was already dealing with accusations of corruption involving a large Canadian engineering firm.

Trudeau has at least seven members on his cabinet who are ethnic minorities. He's known for championing minority groups during his term as prime minister. "We’re going to continue to put forward strong pieces of policy that will demonstrate how we believe that investing in Canadians is the right path forward but we will always and continue to do that in a way that pushes back intolerance and racism every step of the way."