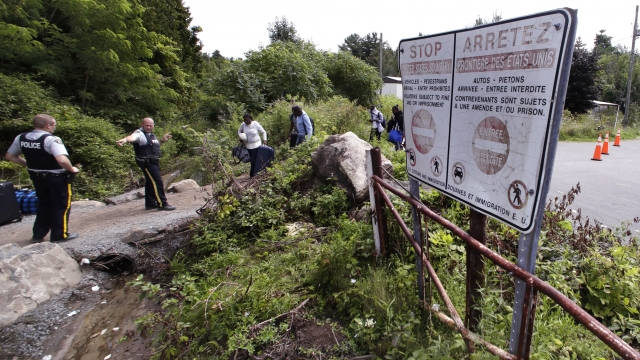 A Canadian court has thrown out a 16-year-old asylum agreement between Canada and the U.S. over the Trump administration's immigration policies.

The Safe Third Country Agreement is a bilateral pact allowing the U.S. and Canada to turn away asylum seekers at official border crossings if they didn't request refugee protection in the first safe country they arrived in.

Human rights groups filed suit over the agreement last year, arguing the U.S. should not be considered a safe country for refugees, because they could be subjected to detention and inhuman treatment by U.S. immigration officials.

On Wednesday, a federal judge ruled the policy invalid on the grounds that it violated a section of Canada's Charter of Rights and Freedoms, which guarantees "the right to life, liberty and security" of people in the country. The judge also suspended the ruling for six months to give the Canadian Parliament time to respond, meaning the agreement will remain in effect for the time being.

The plaintiffs praised the ruling in a joint statement, and called on the Canadian government "to immediately stop sending people back to the U.S. under the ... Agreement, and not to appeal the decision."