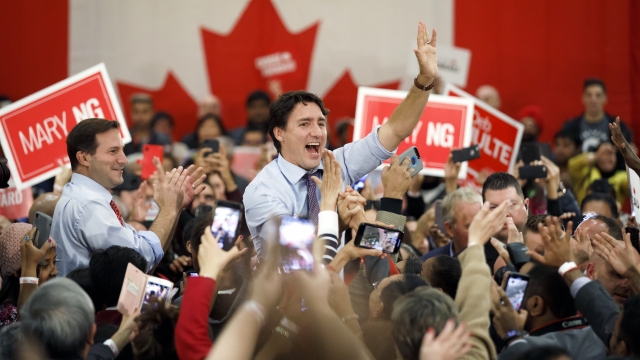 "I have heard you, my friends. You are sending our Liberal team back to work, back to Ottawa with a clear mandate. We will make life more affordable. We will continue to fight climate change. We will get guns off our streets," Prime Minister Justin Trudeau said in his victory speech.

As of early Tuesday, Trudeau's Liberal Party had won 157 seats. That's 13 short of a majority. And it means Trudeau's government is going to need to work with other parties in Parliament to pass legislation.

To secure a majority government in Canada, one party has to secure 170 seats — or more — in Parliament. It's not clear which parties the Liberals will join forces with to form a minority government.

Trudeau made Paris climate accord targets a major focus of his first term, as well as resettling refugees from Syria and Iraq in Canada. He also legalized cannabis nationwide and helped negotiate a new free trade deal between Canada, the U.S. and Mexico.

But Trudeau faced several controversies in the lead-up to Monday's general election. Canada's ethics watchdog ruled in August that he violated the country's conflict-of-interest law by pressuring his attorney general to not prosecute a major engineering firm. And decades-old pictures of Trudeau in blackface and brownface later surfaced.

Trudeau was up against several opponents, but he was neck-and-neck with Conservative Party leader Andrew Scheer up to election day.