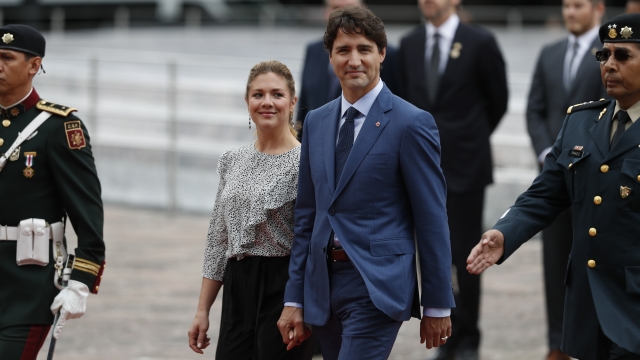 SMS
Canadian PM Justin Trudeau's Wife Tests Positive For Coronavirus
By LeeAnne Lowry
By LeeAnne Lowry
March 13, 2020
The prime minister does not currently plan to be tested because he doesn't have symptoms.
SHOW TRANSCRIPT

Canadian Prime Minister Justin Trudeau is isolating himself for 14 days after his wife, Sophie Grégoire Trudeau, tested positive for the coronavirus. She and their three children are also under a two-week quarantine.

The prime minister's office announced the positive test in a statement on Thursday. It said Grégoire Trudeau is experiencing mild flu-like symptoms, but that overall she is feeling well. She had been traveling in the U.K., and health officials are communicating with people who were in contact with her.

Grégoire Trudeau said, "Being in quarantine at home is nothing compared to other Canadian families who might be going through this and for those facing more serious health concerns."

The prime minister has not exhibited symptoms, and does not currently plan to be tested. He says he'll work from home.

Meanwhile, Canadian Parliament decided Friday to shut down for at least five weeks to avoid spreading the virus, with plans to come back into session on April 20.